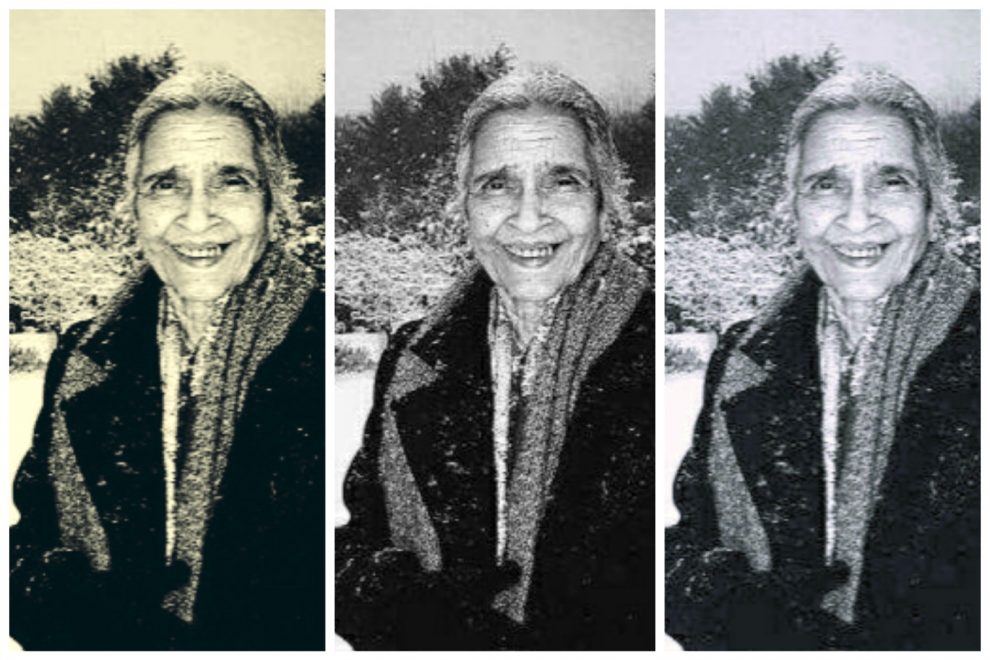 It seemed as if the blue of the sky had ripped through the jungle to touch the earth. Old trees and fig trees stood silent and motionless like hermits. She had been staring at those trees for a while through the open window. Have their leaves too forgotten to stir in fear of the jungle? She tried to turn on her side. Every part of her body ached at the barest movement. A moan escaped her lips. On hearing the same pained breath from the day of the accident, an old fat woman jumped down from a bed in some dark corner of the room and bent over her.

That old hag murmured ‘Jai Guru! Jai Guru!’ and put her face so close to her that the reek of tobacco hit her like that of a pungent incense stick and woke her from her stupor. Shrinking from the odour, she closed her eyes and pretended to be unconscious. The old sanyasini went back to her dark corner as she continued her babble.

Uff! The sanyasini had such a terrible countenance. She was wearing a man’s dhoti tied so high that it hung just below her knees. She had wrapped the end around her enormous stomach. Her breasts and stomach seemed to hang in layers and her bare breasts were covered in blood-red sandalwood paste, the redness of which had also brightened up her face. On the one hand, the unbearable pain in her back and on the other, the abominable appearance of the sanyasini! Her eyes were closed but for how long could she escape her reality? Will she have to spend her entire pointless existence surrounded by such ugly runaways? And the impersonal stillness of the dark room was enough to strangle her. After all, she was not in a room but what felt like a cave in the shape of a closed goods train. One wall had been carved to fashion a small window. The window was also such that it would summon a fresh breath of air with great gusto and then the next minute shut its ramshackle doors with equal enthusiasm to block the next gust. At times, the strong smell of the incense burning in the room threatened to choke her; Chandan wanted to run away. But, how could she?

That day, her helpless sob struck against the low roof of the cave turning it into an echo, and that terrible-looking Vaishnavi bent over her tear-stained face and then ran outside. After a while she heard many voices, but clenching her jaw, she lay there with her eyes closed. The low moonlight that had seeped through the clouds fell on her haggard face. If you looked closely, you could see the tearstains at the corners of her large eyes.

‘See, she has regained consciousness. Had she not, would the tears have been there? I heard her moan twice.’ The same sanyasini was saying, ‘I think she might have internal injuries. It has been eight days; she hasn’t taken even a sip of water. We should borrow a car and take her to the hospital in the city…’

‘No!’ A stern voice rang out like a blow on a kettledrum, ‘she will not die.’ ‘Jai Guru, Jai Guru!’ the sanyasini started saying, ‘Can the words of the guru ever turn out to be false? Here, take the chillum that Charan has just filled, you should rest. I am sitting near her anyway, when you have said she won’t die, then there is nothing to fear.’

‘Why Charan? Have you forgotten to fill the chillum?’ Exhausted, the guru demanded a drag of the chillum from Charan.

‘How can she forget? Actually, we beat her up today.’ The sanyasini put her large palms on the bed.

‘Why? Has she stolen my stash again?’

‘What else! I had counted the five lots that I had made. When I went to fill your chillum today, I found only three and realized what must have happened. When I stared at her in the light of the day, she turned red and the thief was caught. Hasn’t even turned seventeen and she wants to smoke marijuana, and the guru’s at that. I pinched her back three times and so hard that the guru’s trident has formed there.’

‘Ok, ok, go and sleep now, it is not good to assault anyone, Maya! Go, sleep now, Raghav has called me. Some Ramdasi Kirtaniya, has come from Burdwan. I’ll be back tomorrow.’

The guru’s voice was heavy with intoxication.

Excerpted with permission from Bhairavi: The Runaway, Shivani Gaura Pant, translated from the Hindi by Priyanka Sarkar, joint imprint of Yoda Press and Simon & Schuster India. Read more about the book here and buy it here.