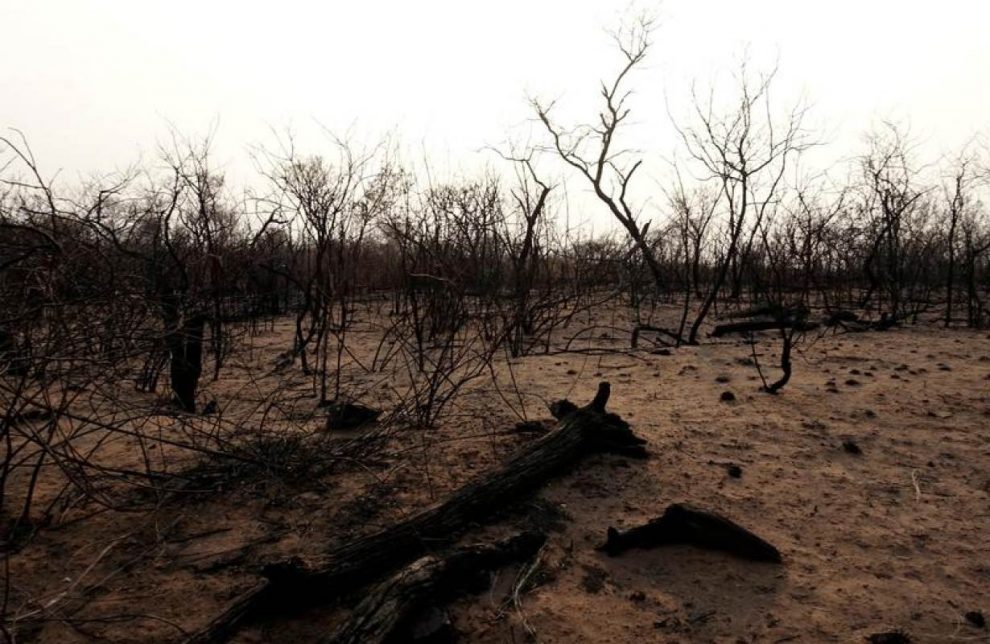 The fires, devastating dry savannah grasslands, forests and agricultural areas mainly in eastern Bolivia, pushed the government to declare a state of disaster earlier this month.

So far this year, 1.1 million hectares (2.7 million acres) have burned, according to the government.

But Bolivian non-profit Friends of Nature Foundation (FAN) estimates the area scorched is twice as big, mainly due to the use of fire to clear farmland, exacerbated by high temperatures and drought.

Candia, who heads the Confederation of Indigenous Peoples of Eastern Bolivia (CIDOB Organica), said local communities had been hit hard by the COVID-19 pandemic and forest fires.

“We need help restoring our territory, which will take at least 10 years,” he told the Thomson Reuters Foundation.

“The forests are our home and market. The situation is critical for us because the fires have burned our medicinal plants, fruits, food crops and our biodiversity,” he said.

In 2019, the worst wildfires in the country’s history razed more than 6 million hectares in the Bolivian Amazon.

The recurring wildfires, fuelled by rising deforestation and more severe drought as the planet warms, have spotlighted a lack of fire prevention and control measures and inadequate investment in firefighting, environmentalists said.

As a new government is set to take power, led by president-elect Luis Arce of the Movement Toward Socialism (MAS) party, forest experts and indigenous leaders are calling on officials to invest in sustainable agriculture and forestry, and better equip firefighters to tame blazes.

The vast majority of Bolivia’s fires are the result of human activity involving uncontrolled burning to prepare previously deforested land for agriculture on a big scale.

“Farmers want to sell and sell and commercialise the land. We want to preserve it. That’s the difference,” Candia said.

Since the 1990s, consecutive governments – including the 13-year administration of Bolivia’s first indigenous president, Evo Morales – have promoted expansion of soy cultivation and cattle-ranching.

Officials have said such policies are crucial for Bolivia’s food production and sovereignty, and have driven robust economic growth, helping lift millions out of poverty.

Marcos Teran, head of the Bolivian Association for Research and Conservation of Ecosystems in the Andean-Amazon (ACEAA), said the country’s laws facilitate the advance of the agricultural frontier.

“Every year deforestation is increasing, with land being cleared for large-scale agriculture. It’s a huge problem,” said Teran, a biologist and tropical ecologist.

Permits to burn land have been suspended due to the pandemic, he noted. “But we are still seeing waves of large forest fires, including in protected areas,” he added.

Bolivian law allows small-scale farmers to seek permits to burn land in a controlled way that has been done for centuries, but those without permits are rarely prosecuted.

“The next government must focus on improving its ability to control the fires once they start and prosecute those burning land without a permit,” said Teran.

“Forest fires are a recurring problem every year, and we haven’t yet as a country been able to tackle this.”

One way to limit forest fires is to focus on sustainable farming that in turn can help stem deforestation, according to Vincent Vos, a Dutch biologist and researcher living in Bolivia.

Over the years, government policies, including fuel subsidies, have favoured agri-business mainly run by foreigners, while small-scale local farmers get little help, he said.

“Despite half the Bolivian territory being covered by forest, there is hardly any legislation to promote sustainable forest use, and even fewer government programmes,” Vos said.

The state should back farmers to grow Brazil nuts, acai berries and cocoa as alternative crops that are kinder to the environment, he added.

Climate change is also fuelling wildfires in Bolivia and other parts of South America, scientists say.

“In addition to government policies that favour the expansion of the agricultural frontier, you have to take into account climate factors like longer periods of dry months that raise the risk of fires,” Teran said.

“This makes a perfect recipe for fires to happen again.”

Forest experts are urging Bolivia’s incoming government to boost investment in fire prevention by equipping and training local firefighters to fight the blazes and limit destruction.

Most are volunteers, and it can take days for equipment and trained firefighters to reach blazing forests.

FAN is calling for a national policy to be adopted to tackle wildfires that would focus on fire management and prevention, better coordination between local and central government, and involvement of the hardest-hit rural communities.

“Strengthening local capacity is key in having a first response and preventing big fires,” said Veronica Ibarnegaray, head of projects at FAN.

The group works with communities to train local fire brigades and strengthen early warning systems allowing them to measure wind speed, humidity and temperature, to monitor fires and use slash-and-burn clearance in a controlled, timely way.

Indigenous people urgently need training in fire-fighting and the use of drones to manage fires better, CIDOB’s Candia said.

“We’re focused on preserving the forest and dealing with COVID. But I fear the fires will happen every year,” he warned.