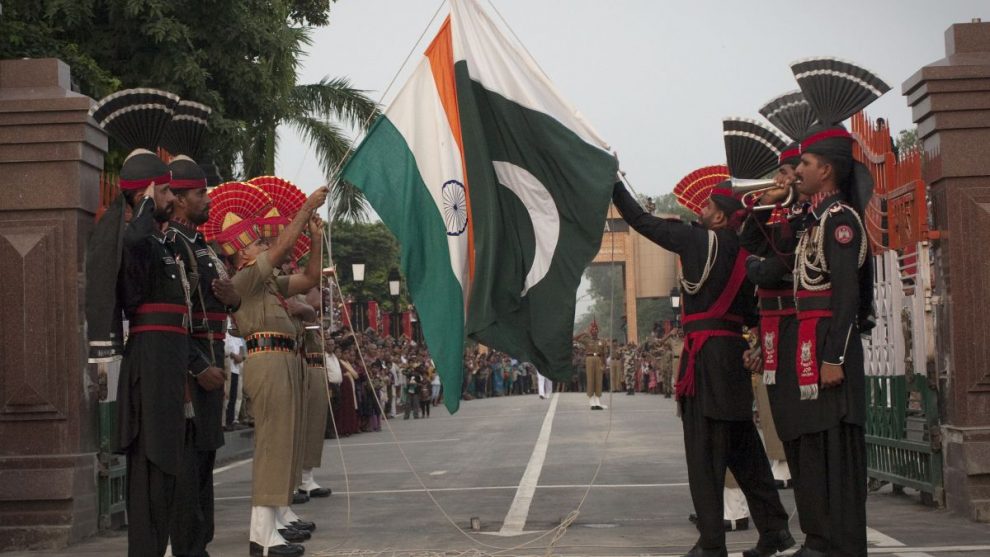 Mutual distrust continues to play havoc with Indo-Pakistan relations — and with their economic development. Both countries are today in the thick of a mounting arms race and, in the process, are bleeding each other white — even without fighting. New Delhi and Islamabad need to devote their resources mainly towards providing a better deal to their poverty stricken people. Yet between them they are currently spending Rs.10,000 crores annually on arms. Only the two Super Powers and the powerful arms lobbies at home and abroad have reasons to be happy. The arms race has forced both our countries to become largely dependent on Washington or Moscow — and, in a way, made India and Pakistan their client states. Undoubtedly, we are independent. But are we genuinely non-aligned? Non-alignment was described by Nehru as a projection of a country’s independence at home to independence abroad. Are we really judging every issue on merit? Afghanistan is a case in point. Would New Delhi have taken the same stand on Afghanistan but for its dependence on Soviet arms?

Undoubtedly, we can blame Pakistan and the United States for the present situation. We can well argue: “We would not be dependent today on the Soviet Union for sophisticated military hardware or for it veto in the Security Council but for Pakistan and Kashmir.” At the same time, we cannot shut our eyes to the harsh realities of a practical world. India and Pakistan have gone to war on Kashmir more than once. The answer, of course, lies in finding a final solution to the thorny imbroglio. But this does not necessarily mean that in the absence of a settlement we must keep arming ourselves to the teeth, ignoring bigger considerations of the welfare of our two peoples. Fortunately, Pakistan appears to have come to accept the bitter truth. It cannot take away Kashmir from India by force of arms. There is no alternative to converting the present line of actual control into an international boundary with minor adjustments. The Simla Agreement, in effect, provides for this even if Islamabad may not admit so today.

This issue came up pointedly in Parliament during the discussion on the demands of the Ministry of Defence. Mr. Biju Patnaik, Janata leader, then gave Parliament a gist of the recent talk he and Mr. George Fernandes had with President Zia in Islamabad especially in regard to a no-war pact between the two countries and arms limitation. Mr. Patnaik said: “When I asked President Zia what happened to this pact, he replied that when he met Mrs. Gandhi he presented to her the pact and said: ‘Here is the no-war pact. Let us sign it.’ I asked: ‘Does the no-war pact include Kashmir?’ President Zia replied: ‘Yes, whatever happens there will be no war between us; whatever happens there will be no armed conflict between us. This is my understanding of the no-war pact or the treaty of friendship.’ We said: ‘We presented this to you from Nehru’s time. He said, “At that time, of course, Ayub did not accept. But we are offering the same, except one or two clauses, which I am sure, Mr. Narasimha Rao knows.’”

We in India blame Pakistan for pushing us into an arms race. We, therefore, ask: “Why does Pakistan require F-16s?  Is it going to use them against Afghanistan, nay the Soviet Union?” But Islamabad has its own view, conveyed once again to Mr. Patnaik, who told Parliament: “we asked (Islamabad): ‘What was the need for your F-16s? What is the need for your Sparrows and the Harpoons and all these equipment that you are getting? You are only making us buy better equipment from elsewhere, from wherever we can, to have that edge, that balance or whatever you may consider it.’ Then there were counter questions. They said: ‘Why is it that India has got two and a half times more tank power than we have? The tanks are not going to climb the Himalayas. They are not going into the Bay of Bengal or the Arabian Sea. These can be used only against us. If you are buying MIG-29s or 31s or whatever it is, which are better than F16s, we are not complaining. Why do you complain then?” They also said: “You have a much bigger navy. Who are you going to use it against? America?”

Not only that. Mr. Patnaik also gave the House an inkling of Pakistan’s present thinking in the course of an interruption to clarify an earliest statement in regard to the mood across the border and what President Zia had told him. The Janata leader had in a previous debate stated that Pakistan had assured him and his colleague that “they have absolutely no intention of attacking India and if they want they can send a team to inspect and go and see the installations.” When the Defence Minister, Mr. R. Venkatraman, queried in the course of his reply to the Defence Ministry debate: “Is it going to be a mutual or unilateral inspection?” Mr Patnaik replied: “Naturally mutual.” Mr. Patnaik added that he would like to clarify what he had told the House three days back. What he understood from the President of Pakistan was that “if the Government of India wants to send a team of high military officials to inspect our installations, dispositions and what you call very big manoeuvres, they are welcome to come, see, inspect and advise us that to do…”

Proposals favouring Indo-Pakistan parleys on arms cut or mutual arms limitation talks (MALT) are not new. A proposal for an accord on force ratios was initially mooted by Islamabad in 1980 — first to India’s former Foreign Secretary, Mr. Ram Sathe, next to Mr. Swaran Singh when he called on Gen Zia and, thereafter in July, by Mr. Agha Shahi, Pakistan’s former Foreign Minister in his controversial banquet speech in New Delhi. The proposal was renewed by Mr. Shahi during his meeting with Mr. Rao in Islamabad in mid-1981. Mr. Rao then reminded Mr. Shahi of the understanding reached during his visit to New Delhi. India had then urged that the issue should be taken up only “at the appropriate time” after a broad political understanding had been reached. Significantly, Gen Zia also broached the subject during his talk with Mr. Rao. But the latter pointed out that he and Mr. Shahi had already agreed not to talk about it yet. Unfortunately, the idea was not pursued. Instead, talk has centred on a no-war pact or a peace and friendship treaty and, finally on joint commissions.

In fact, President Zia made his proposal for arms limitation first when I interviewed him in Islamabad in February 1981. Gen Zia told me: “I suggested one thing to Sardar Swarn Singh when he was here. I said to him: Tel us, whether Pakistan should have a force for its own security or not. Should India have a force for its security or not? And if you come the conclusion that there is justification for Pakistan to have an armed force for its own security, then ask your experts to tell us what should be the strength of our forces considering the defence requirements of a country like Pakistan and its geographic borders. I would accept their assessment and not debate it. In the process you may probably ask our reaction — if you were to say all right, Pakistan should have this much and India that much. I said have as much as you like. I am not concerned. But I would be very much concerned when 18 divisions face Pakistan. We have then to think twice as to what all this exercise is about. But I made this offer.”

President Zia added: “Unfortunately, we had no reaction at first. The reaction that came much later was ‘no’. India said, this is not a fair proposition. Because, Pakistan should have what Pakistan thinks necessary and India should have what India thinks necessary. Then I said, “If that be the case, why should India get allergic to Pakistan’s stress on its legitimate defence requirements. Here again, I proposed that if you want to know what we have and what we do not have please come and ask me. I will tell you exactly what we have. And what you have I will not challenge.” Did President Zia consider India to be Pakistan’s main threat? He told me: “I will not write it off, because there is a history behind it. There is a deployment of troops…. When I met Mrs. Gandhi in Salisbury in April 1980, I asked her: What are you afraid of? Pakistan is a small country!’ She said: ‘No, you are the major threat to India. Because you have attacked us three times before’. I said: ‘Madam, it might have been at that time. But you have reduced us to half and dismembered us….”

India’s stand on President Zia’s proposal was spelt out by Mr. Venkatraman. He told the Lok Sabha: “The problem is that… Pakistan goes on arming… If they are really honest and sincere about normalizing relationship, they would have only to say ‘all right, we will not get this equipment, therefore, you need not also get further arms’. But they have not said this…. How are you sure that they are not buying time… I cannot accept their word. I repeat I cannot take them at their word because of their past history, their past conduct and their past performance always shows that whenever they have got sophisticated weapons they have tried them on India.” The problem in a nutshell is one of crisis of confidence. This can be tackled to a great extent through mutual arms inspection and arms limitation. These may not necessarily ensure durable peace. But a significant step will have been taken towards building mutual confidence — and in crying a halt to the arm race.—