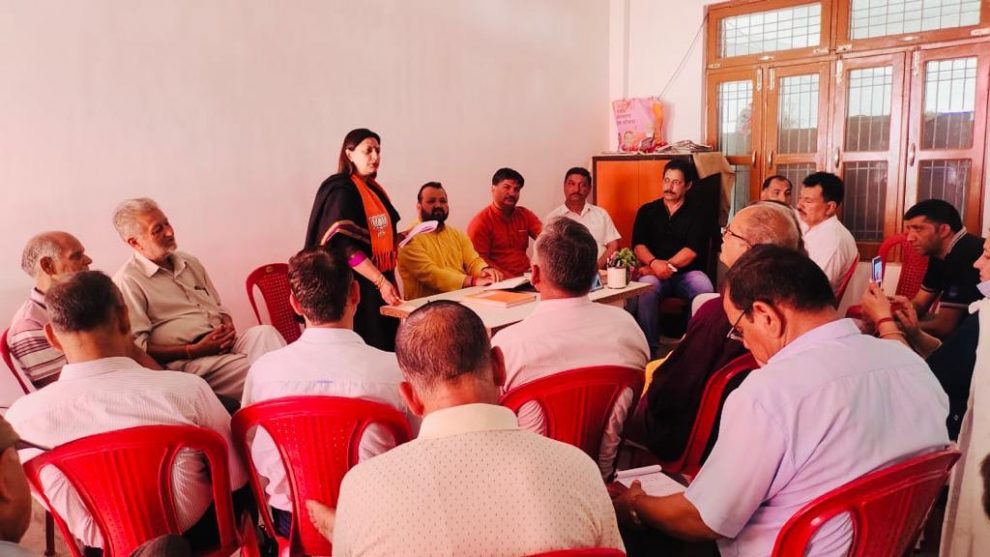 The Dispatch Staff
Add Comment
"We have to ensure that every area is covered and no needy person is left", Rekha

JAMMU: Rekha Mahajan,  Secretary, J&K BJP & Prabhari District Akhnoor, in a meeting, discussed and finalised the basic arrangements for the forthcoming programmes, particularly, those related to celebrations on completion of 8 years of Modi government.

The meeting was organized under the presidentship of District President Akhnoor, Jagdish Bhaghat at Akhnoor.

Rekha Mahajan, while giving detailed insight about these programmes, said that the party  has decided to reach the public in every nook and corner, with senior  leaders to directly interact with the masses  at Panchayats level and extend every possible help to those in need. She asked the party activists to frame teams at district and Mandal  levels to  reach out to various sections of the society with the pro-development projects and pro- people welfare schemes launched by Modi government during eight years.

“We have to ensure that every area is covered and no needy person is left”, Rekha said and added that each one of us has to always follow BJP’s principle of ‘Antodaya’ in mind while  discharging party’s responsibilities, which underlines to reach last man in the queue. She further said that BJP activists have to serve as bridge between the government and the people and educate them about what has been done for massive development and socio-economic upliftment of the poor.

Mistake done in 1990, will not be repeated time and again : Ravinder Raina
Congress, Youth Congress continues its protest in Ukhral, Ramban
Comment