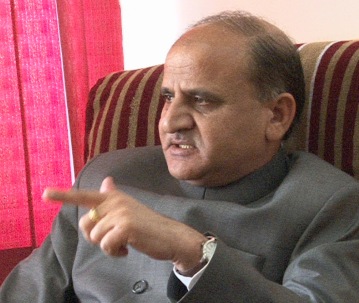 His remarks come in the backdrop of the central government clearing the decks for people from across the country to buy land in the union territory by amending several laws.

“The BJP had earlier promised securing land and jobs for the local youth but taking a U-Turn it has now decided to open it for everyone which will reduce the opportunity for locals,” Chand claimed while addressing party workers here.

“BJP-led central government is trying to destroy the cultural identity of Jammu and Kashmir by selling land to outsiders,” he said.

Chand urged the central government to restore the statehood of Jammu and Kashmir along with jobs, land and security for locals.

Jammu and Kashmir has witnessed massive destruction due to decades of turmoil, and rising unemployment is a major concern, the Congress leader said as he urged the government to secure jobs for Jammu and Kashmir’s youth.

The people of the Jammu region have sacrificed their lives for the nation, Chand said, adding that serving in the army is their inherited profession and it is because of this, there are thousands of martyrs from the region.

“Being nationalist, the government must reward them, but it seems that the present government is trying to destroy their future as well as the cultural identity of the Dogras by selling away their land and job to outsiders,” he said.

He also demanded a special employment package for the youth of Jammu and Kashmir, saying the COVID-19 pandemic has rendered millions jobless.