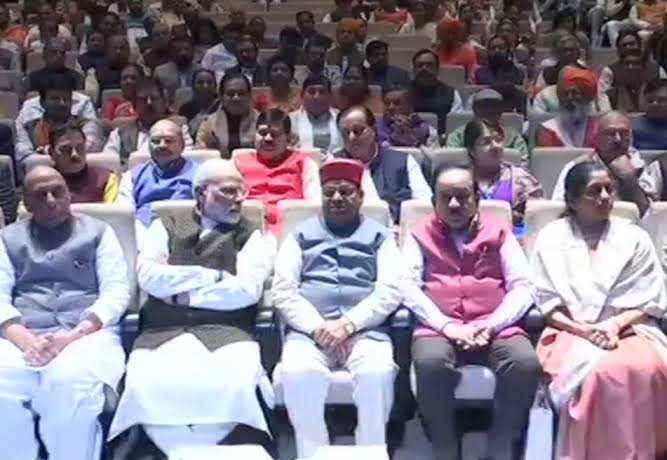 A BJP parliamentary party meeting was held on Wednesday at the Parliament Library Building ahead of the tabling of the Citizenship (Amendment) Bill, 2019 in the Rajya Sabha by Home Minister Amit Shah later in the day.
Prime Minister Narendra Modi, Defence Minister Rajnath Singh, Railways Minister Piyush Goyal, Parliamentary Affairs Minister Pralhad Joshi, IT and Law Minister Ravi Shankar Prasad, External Affairs Minister S Jaishankar and Women and Child Development Minister Smriti Irani were among the top BJP leaders who attended the parliamentary meeting. Other members including Kirron Kher, Tejasvi Surya, Jitendra Singh, Rajyavardhan Singh Rathore, Sakshi Maharaj, GVL Narasimha Rao, Roopa Ganguly and Ravi Kishan also participated in the meet.
Union Ministers Debashree Chaudhuri, Arjun Ram Meghwal, Kiren Rijiju, Giriraj Singh, Hardeep Singh Puri, Jitendra Singh, and Santosh Gangwar were present in the meeting.
The Bill is scheduled to be tabled by Shah in the Upper House at 2 pm.
The proposed legislation seeks to grant Indian citizenship to refugees from Hindu, Christian, Sikh, Buddhist and Zoroastrian communities fleeing religious persecution from Pakistan, Afghanistan and Bangladesh and entered India on or before December 31, 2014.
After heated discussions spanning seven hours, the Citizenship Bill was passed by a majority of 311 votes against 80 in the Lower House where 391 members were present and voting on Monday.
The NDA will require the support of at least 123 MPs in the 245-member Rajya Sabha for the Bill to be passed.