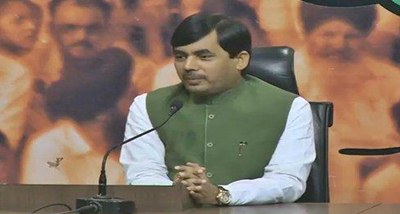 BJP today came down heavily on Congress following its leaders meeting with President Ram Nath Kovid against the farm laws.

Talking to AIR (News), party spokesperson Shahnawaz Hussain termed the laws as pro-farmer and accused the Congress of misleading the farmers.

He said the main opposition party should stop playing politics on this issue.

Mr. Gandhi told media that the protesting farmers will not  go back home until these farm laws are repealed.

Congress leaders also wanted to march towards Rashtrapati Bhavan over the issue which was stopped by the police.