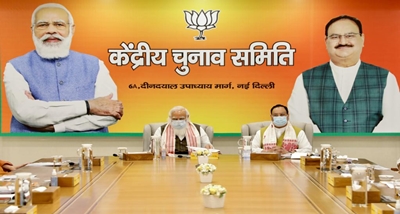 BJP Central Election Committee meeting was held in New Delhi to finalise the party’s first list of candidates for five Assembly polls. Prime Minister Narendra Modi, BJP President J. P. Nadda and other senior party leaders including Union Ministers Amit Shah and Rajnath Singh  attended the meeting at the party headquarters yesterday. In the meeting, the party leaders discussed the names of BJP candidates for the First Phase of the polls in Assam and West Bengal.

The Congress Central Election Committee will also meet tomorrow to clear the names of candidates for West Bengal and Assam Assembly elections.