Srinagar: National Conference leader Omar Abdullah on Saturday said the BJP, its allies and the administration in Jammu and Kashmir should accept the verdict of the District Development Council elections and stop indulging in horse-trading which will only discredit democracy and the institutions.

“In case of Shopian district, some of the winners — from Congress, PDP and National Conference — are brought to Srinagar and coerced to join the Apni Party,” Omar told reporters at a press conference here.

An audio recording of a telephone conversation was played to buttress the claims made by the former chief minister in which the husband of a winning candidate from Shopian, belonging to the National Conference, is promised the release of his brother within three days if he makes his wife to “join Altaf Bukhari’s party”.

The woman DDC member, Yasmeena Jan, had joined the Apni Party on Friday.

Omar said the BJP, the Apni Party and the administration should accept the verdict of the people in favour of the People’s Alliance for Gupkar Declaration (PAGD).

“PAGD won most of the seats, Why cannot the BJP, the Apni Party, the Centre and the administration accept it. The prime minister in a health-related function today spoke about DDC elections and democracy.

Every BJP leader has been trumpeting that DDC elections were a victory of democracy… We want to tell them ‘stop playing with democracy’,” he added.

The National Conference vice president alleged that at present, the efforts are focussed on subverting the democratic verdict in Shopian district.

“Who knows where all it can lead if it is not stopped now,” he said.

“If this (horse-trading) is not stopped, I think democracy and institutions are being discredited. This is anything but democracy,” Omar added.

The NC leader said the anti-defection laws should be applied to all candidates who switch sides after the election results.

“There is an anti-defection law in Parliament, assembly and panchayats, it should be applied to DDC as well. Let those switching sides contest again and we will know who stands where.”

Asked about ‘friendly contests’ between PAGD constituents on several seats in the Valley, Omar said there were difficulties but by and large the alliance had succeeded in overcoming them.

“The alliance is just a few months old. And elections were announced soon after the alliance was formed. We have by and large been able to overcome the problems but you also have to understand that there were several good candidates in some seats,” he said.

Asked about the role of the Congress in seat sharing, Omar said it was understood that the national party was a part of the alliance as it was one of the signatories to the original resolution on August 4, 2019.

“However, the Congress only wanted a seat-sharing agreement which was not acceptable to the alliance,” he said.

Asked about the future of the PAGD — an amalgam of various mainstream political parties demanding the restoration of special status to Jammu and Kashmir — Omar said the alliance has a bigger mission ahead of it and will continue to pursue it. 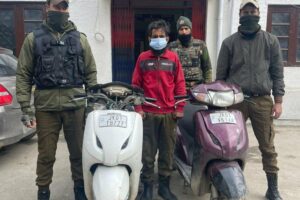