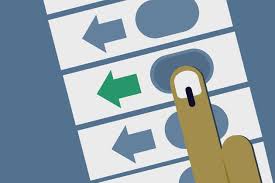 Voters were also provided certificates by officials at the polling booth for participating in the democratic exercise.
“Voters participating in voting were honoured by giving certificates – District Patna,” Chief Electoral Office (CEO) Bihar tweeted.
Over 2.86 crore voters are eligible to cast their vote in the second phase which is also the largest of three phases of assembly poll in the state.

There are 1,464 candidates in the fray including 46 from BJP, 43 from Janata Dal (United), 56 from Rashtriya Janata Dal (RJD), and 24 from Congress.Five candidates from the Vikasheel Insaan Party (VIP), which is part of the NDA, are also in the fray. From Mahagathbandhan, three Left parties are contesting on 14 seats (CPI-ML six, CPI and CPM on four each).

Road construction minister Nand Kishore Yadav is seeking re-election from Patna Sahi.
Polling was held for 71 constituencies in the first phase on October 28 with precautionary measures in place against the novel coronavirus. Voting in the third phase will take place on November 7 and the results will be declared on November 10