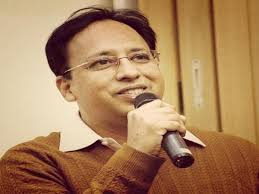 Bihar BJP president Sanjay Jaiswal urged Chief Minister Nitish Kumar to take action against corrupt officials in the state.
“Many newspapers published and raised the problem in 14,000 rural roads constructed. I want to bring into your attention that roads are being built according to good standards and this is not possible without collusion,” read the letter written by Jaiswal on November 6. The BJP leader said that some people including politicians have embezzled Rs 95 lakh which was meant for the construction of a road in his Paschim Champaran Lok Sabha constituency.
He also cited irregularities in flood relief works by the government.