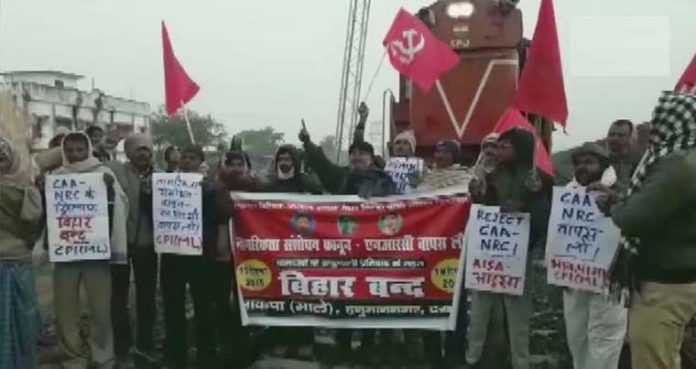 Following the call of “Bihar-Bandh” against the Citizenship Amendment Act (CAA) by the Rashtriya Janta Dal (RJD), party supporters stopped the Darbhanga-New Delhi Bihar Sampark Kranti Superfast Express on Saturday.
Train tracks have also been obstructed in Patna’s Kumhrar area alongside other regions in the state such as Arrah, Jahanabad and Hajipur. Supporters of other parties have also come out in support of the “Bihar Bandh” called by the RJD, with workers of the Vikassheel Insaan Party (VIP) breaking the barricades during a demonstration held in Patna.
The RJD supporters too came out on the streets and burnt tires to register their protest against the CAA. The party workers in Vaishali district blocked the highway with the help of buffaloes.
Meanwhile, Senior Superintendent of Police (SSP) Rajeev Mishra Gaya said that the administration had held talks with the Bandh supporters to carry out protests in a peaceful manner.
“We had held talks with the Bandh supporters and asked them to carry it out peacefully using democratic means. The administration has made adequate arrangements to ensure that no untoward incident takes place today,” Mishra told reporters here.
RJD leader and former Deputy Chief Minister Tejashwi Yadav on Friday appealed to the people of the state to participate in the Bihar bandh against the Citizenship (Amendment) Act (CAA) on Saturday.”Bihar will be closed tomorrow. So I appeal to the people for their support.
“In protest against CAA and NRC, the RJD will be leading a Bihar bandh on December 21. On the eve of it, the party carried a torch rally in all districts to give the call for a peaceful protest”, Tejashwi tweeted on Friday.