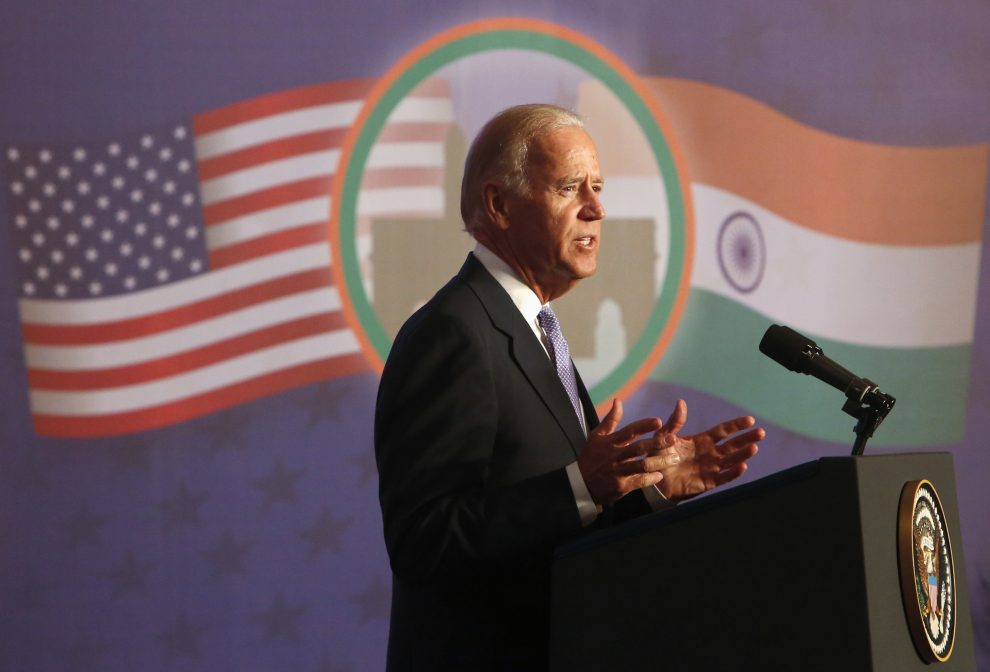 Joe Biden has spoken about his world vision in an article wherein he has adumbrated his vision on retrieving America’s pre-eminent position in world affairs. Interestingly, he calls it why America must lead again and how to rescue US foreign policy after Donald Trump.

Biden starts with at least two advantages; one, he was the Vice President with a noble laureate, popular President Barak Obama. He is entering White House after the horrible pandemic that devastated America’s economy and society. He is known to be predictable, moderate, balanced and above all institutional, a great contrast to Trump.

His main mission will be to repair and reconstruct the damage done by Trump. To start with, he will try to repair the global political architecture, established after World War-II. Trump had withdrawn from such world institutions. Biden will rejoin WHO before it is completely taken over by China. He will also enter into negotiation with Paris Agreement. The United Nations, which is fundamentally fractured, will receive greater attention.

Apparently, there will be three flash points that will draw Biden’s immediate attention. First, the Iran nuclear deal, the punitive sanctions may be lifted and Biden will rejoin the Iran deal while bringing Iran back into compliance. Iran is inclined also to do so, unlike Trump, who founded American Arab policy on the Israel-Saudi Arabia axis. Biden will go beyond and seek opening up to other powers in the region.

Indubitably, China is the foremost challenge to the US. Biden’s policy on China is not clearly articulated, although there is a bipartisan consensus in the US about China posing a primary challenge to its supremacy through 5G and BRI etc. Biden, along with US allies, will put pressure on China for ensuring security on South China Sea. Biden administration may not act unilaterally on trade issues. But the decoupling of US-China supply chain will continue, though the process may be bit slow. All in all, Biden’s policy towards China will be of containment as well as cooperation. The containment is clear, the cooperation might ensue in dealing with pandemic, climate change and nuclear non-proliferation, at least to North Korea.

The third concern is Russia. Biden may extract a cost from Russia for meddling in US elections in 2016 and partly in 2020. America had imposed sanctions after Russian conflict with Ukraine, which is likely to continue. American’s sanctions have pushed Russia through the oil and gas pipeline and defence sales etc. Biden might repeat a Nixon moment with Russia. In 1972, American President Richard Nixon visited China against a strong popular anti-Communist sentiment and ushered in a thaw in Sino-American relations. Biden might try to normalise strained relations with Russia and wean it away from Chinese tent.

However, Biden may not have a smooth sail as the Democrats lack majority in the Senate. Even if they win a couple of states, they will have a tenuous majority, which will hold them back from a pro-active foreign policy. Second, the left wing of the Democratic Party has become stronger. They will exert influence on tilting towards a radical posture in foreign policy.

On India, the apprehension from Indian observers is that he might not be as friendly as Trump since Narendra Modi twice endorsed Trump’s candidature; in a rally in Houston called ‘Howdy Modi’ and then in Ahmedabad. But this is a misplaced concern as Biden is an institutional person, and will focus on political rather than personal. His policy will largely reflect Obama’s foreign policy, including towards India, as he was his Vice President. India, for various compelling reasons, will be crucial to Biden. Also, Democrats have had a romantic attachment with India.

As a sidebar, Biden has received the second highest award from Pakistan. There have been talks of linkages with Islamabad,which in diplomatic terms are called parallel talks. Biden and his Vice President Kamala Harris have been sceptical of India’s moves on Jammu & Kashmir. But it is one thing to make a radical statement when one is out of office, and another to follow these in policy terms when in power.  Biden will be more concerned about reasserting US leadership in the world than offending the biggest democracy i.e. India.

In Biden’s approach to India, the reference point will be Indo-Pacific. Washington has been nudging New Delhi to play a role in this region. Now that the Quad has been established, America will continue to push India to be active. Biden will engage America’s allies in the region as he will continue with the traditional relationship between strategic partners like India and Indonesia. So the security partnership consolidated by Trump will continue.

The strategic trajectory with New Delhi should grow. Just before US elections, BECA – Basic Exchange and Cooperation Agreement – was signed, which allowed both countries to exchange geo-spatial data sharing and GPS military signals from US to India. However, they stopped just short of signing a security agreement like the one done on 9 August 1971 between USSR and India. The Indian security observers thought that New Delhi was waiting for the US polls to be over before it went whole hog with the Americans. This might happen under Biden regime.

On economy, Biden will be balanced and better. He might revive a H1B visa for Indian professionals; the punitive tariffs on steel and aluminium may be revoked; GST will most likely be revived. American investment under Trump had increased and is likely to grow even under Biden.

On climate change, there will be greater convergence between India and America. Both were critical of the Paris Agreement. Biden will join it but will initiate discussion to make it Paris Plus. On climate change technologies, India and the US will have greater exchange and cooperation. America is by far, the world-leader in research and innovation. Given India’s commitment to climate change, it should benefit from transfer of technology.

Biden may keep an eye on the internal developments in India. Democrats had some concerns on Kashmir. Much of the reaction from Biden will depend on how India handles its internal issues concerning mainly human rights and personal liberty. For instance, Kashmir policy is not written in stone. Even the Home Minister had said in Parliament that statehood will be restored if situation becomes conducive.

Will Biden support India’s permanent membership in UNSC? Yes, it’s most likely. Obama had pitched for a permanent seat for India in UNSC on November 8, 2010. However, its support alone is not sufficient.

Will US come to India’s aid should China invade? In terms of military supplies, and sharing military intelligence, in case of a war, the answer is yes. But putting actual US military boots on the ground, the answer is no. Even in case of invasion of Taiwan, the American military entanglement is unlikely. It’s assumed there’s no appetite in US for military involvement. That is why it’s withdrawing from Afghanistan and Syria. However, given America’s anxiety over China overtaking it into the number one position, US military involvement to check Chinese expansion cannot be ruled out. China’s presence looms large in Americans’ psyche. Biden, only last week, said, US would defend Japan if Senkaku islands were invaded by China. In the wake of China’s aggression and expansion, US-India relations are expected to deepen. But politics is dynamic and international politics is reflection of countries pursuing their national interests. US position might change in correspondence with its national interests as India has been a reluctant partner. So like before our own actions and inactions will shape the relations between India and US.