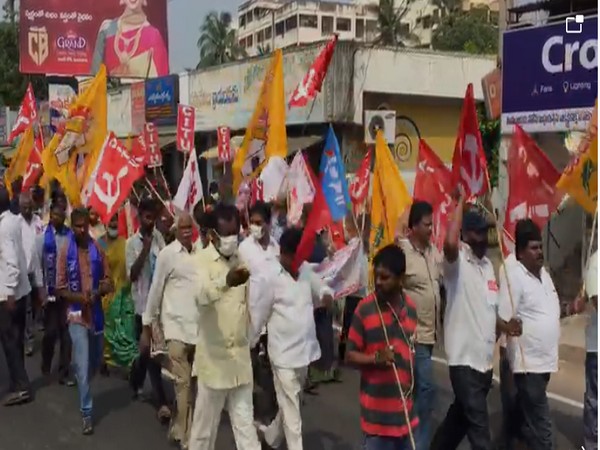 Protesters raised slogans against the BJP government as they observed Bharat Bandh in Gannavaram mandal of Krishna district on Friday. The bandh was called to protest against the Centre’s farm laws and its decision to privatize Visakhapatnam Steel Plant.

All political parties except Bharatiya Janata Party (BJP) and JanaSena Party (JSP) and the YSRCP, announced their support to the nationwide bandh. Shops, commercial establishments were seen closed in the district and the state buses were seen confined to the depots.

Farmers are observing ‘bandh” Bharat Bandh’ today to mark the completion of four months of their agitation against the central farm laws. The bandh, called by the Samyukta Kisan Morcha (SKM), will be observed till 6 pm. All roads and trains will be blocked and all services are expected to remain suspended, except for ambulance and other essential services.

According to a statement issued by the SKM, the bandh has been called for the repeal of three agricultural laws, for law on Minimum Support Prices (MSP) and procurement, cancellation of all police cases against farmers, rollback of “electricity bill and pollution bill” and for reducing prices of diesel, petrol and gas. The release also said that the bandh call has been given “against the anti-farmer government” on completion of four months of farmers’ struggle in Delhi.

Farmers have been protesting at the different border of Delhi since November last year against the three newly enacted farm laws — Farmers’ Produce Trade and Commerce (Promotion and Facilitation) Act, 2020; the Farmers Empowerment and Protection) Agreement on Price Assurance and Farm Services Act 2020 and the Essential Commodities (Amendment) Act, 2020.