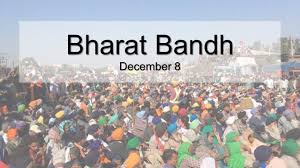 Paramilitary forces have issued detailed instructions for their troops regarding Bharat Bandh and asked them not to remove body protectors and to exercise maximum restraint while dealing with the situation.
According to a document, sent by CRPF to all officers handling law and order situation in various states, paramedic staff and doctors are accompanying troops for any medical assistance. This has been done after an input which says that some anti-national elements can create problems for the forces.
“A call has been given to observe Bharat Bandh on 8 December wherein anti-national elements may try to create some problems to force deployed on duty,” a communication sent by CRPF says.
Forces have asked officers like Commandant and second officer in command to be present all the time at the spot and ensure procedures given by the top brass.
Paramilitary forces like the CRPF, BSF, CISF and others have also briefed jawans about the sensitivity of the situation and have asked them to observe restraint.
A senior BSF official said that troops have been asked to remain on the position given to them till the time of withdrawal, “Maximum restraint should be taken while dealing with the situation,” BSF official said quoting an official communication.
“Total available riot-drill equipment be carried by each Coy during deployment. QAT should be kept ready near to deployment in case of any need. Doctor/Pharmacist/Paramedic will accompany and remain with troops till withdrawal,” the CRPF said.
Farmer unions on Friday decided to intensify their agitation against the farm laws calling for ‘Bharat Bandh’ today stating that they were not satisfied with amendments to the agricultural legislation being proposed by the government.
Thousands of farmers have been protesting on different borders of the national capital since November 26 against the three newly enacted farm laws–Farmers’ Produce Trade and Commerce (Promotion and Facilitation) Act, 2020, the Farmers (Empowerment and Protection) Agreement on Price Assurance and Farm Services Act, 2020, and the Essential Commodities (Amendment) Act, 2020.