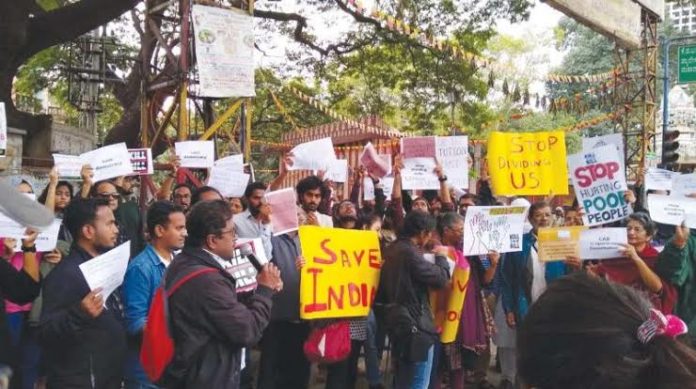 Activists, retired teachers and others protested against the National Register of Citizens (NRC) and the Citizenship Amendment Bill here on Sunday.
“This protest is against the Citizenship Amendment Bill, which will be introduced in Parliament tomorrow. We oppose it and the NRC also.” “The Bill says that all refugees are welcome in the country except Muslim refugees. This is against the character of our country and therefore we oppose it.”
Another protestor said: “I am shocked. This Bill will cost us a huge amount of money, which could be used for building hospitals, schools and universities. The NRC Bill is to make people frightened, which is not good. Therefore, I oppose the Bill.”
Mohammad Sarfaraz from the Human Rights Empowerment Council of India said: “We oppose this Bill as it is against the Constitution. It has excluded Muslim refugees. If we do not raise our voice here, then who will.”