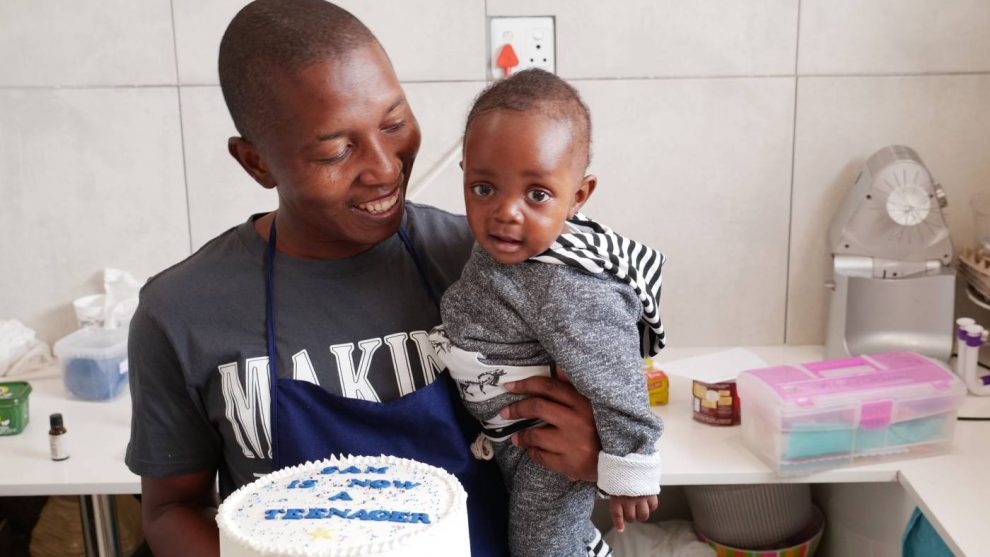 For Davy Tsopo, a WiFi password changed his life.

When Tsopo lost his cleaning job at a Johannesburg restaurant during lockdown, a neighbour thought sharing his password might help distract Tsopo from his money worries.

At first, Tsopo watched episodes of U.S. reality baking show Cake Boss to pass the time as he and his wife cared for their newborn son, but soon found himself scribbling down recipes for chocolate gateau, scones, biscuits and red velvet cake too.

“This is where it all began,” said Tsopo, 35, holding a worn-out notebook filled with the recipes in the kitchen he shares with four other families living in his apartment block.

With the help of former colleagues, neighbours and even anonymous good Samaritans, his impromptu cake business – Cakey by Davy – exploded, with South Africans as far afield as Japan, Italy and Ireland ordering cakes for family back home.

Cakey by Davy now has more than 1,000 Instagram followers, and Tsopo has given television interviews and been invited to speak at entrepreneurial events.

He has been baking at least 10 cakes a week and is making twice his previous salary.

Working from home – instead of doing 16-hour shifts at the restaurant – means he can also spend time with his son, who is now nine-months old, while his wife is at work.

“My former boss called me when he saw my company getting attention and said he’s sorry he wasted my time. I told him he hadn’t, everything happens for a reason, and losing my job as a cleaner was my blessing in disguise,” Tsopo said.

He said many of his Instagram followers were motivated by the global Black Lives Matter anti-racism protests, which saw many South African social media users urging each other to support Black-owned businesses hit by the coronavirus pandemic.

But Cakey by Davy drew support from all corners.

A friend designed the company logo, another helped him enter a competition in which he won a laptop, a neighbour donated baking tins, a customer started giving him IT lessons. One unknown well-wisher even delivered a WiFi router to his home.

“Maybe some people thought because I was a cleaner, I was nothing, a useless thing,” said Tsopo, wearing his baking apron in preparation for his next order.

“But my story is a reminder to never undermine someone.”

A month after South Africa’s nationwide coronavirus lockdown was announced in March, three million people had lost their jobs and one in five were going hungry, a survey by several local universities found.

Many immigrants, like Tsopo who comes from Zimbabwe, were among the hardest hit by the collapse of the job market during lockdown, which drove unemployment rates to more than 30%.

“I don’t want to lie to you, I was so stressed when I lost my job, but I have never had that begging mind. I wanted to start my own thing and be my own boss” said Tsopo, cradling his son, Travis, in the communal kitchen.

Originally from the Zimbabwean city of Bulawayo, Tsopo joined the estimated 600,000 Zimbabweans living in South Africa, according to the most recent government data from 2016, representing about 40% of South Africa’s foreign-born residents.

Unable to afford university fees, he worked as a cleaner and an informal trader after leaving school.

His first attempt at business ended when police confiscated the memory cards and USB ports he was selling outside mines in his homeland – taking all his savings with them and spurring him to join the exodus south.

“The economic hardships in Zimbabwe are too tough. Jobs are scarce. I had no choice but to join the great trek to South Africa,” he said, leaving with just enough money to buy a ticket to Johannesburg and stay with his cousin until he found work.

Despite the success of his business, money worries are never far away as the pandemic continues to weigh on Africa’s second-largest economy.

“What if things get worse? What if there is another pandemic and I fall into debt?” said Tsopo, his fingers stained green from the food colouring he used to prepare his last order.

South Africa has the highest number of confirmed COVID-19 cases on the continent at about 752,000, and more than 20,000 deaths, according to the African Centre for Disease Control and Prevention.

Tsopo said one day he would like to open his own bakery, where customers can come and drink coffee and order bespoke cakes for special occasions.

In the meantime, he is enjoying being his own boss and having more time to spend with his family, and more sleep.

The first few months of Travis’s life were spent in the kitchen with his dad, sampling icing and watching him mix flour, eggs, milk and butter together. Now he is older, Tsopo’s cousin babysits Travis while Tsopo bakes.

“Imagine, one day I may be asking people to send in their CVs to work at my own bakery. Then I’ll be the real cake boss.”