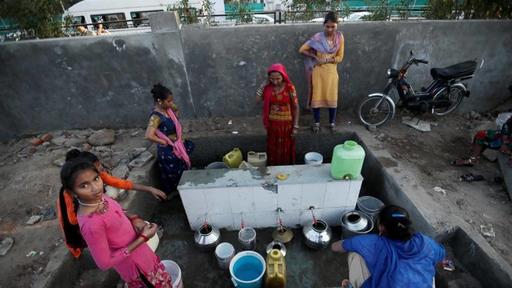 A water desalination plant powered by solar energy in a small east Indian town, backed by beer maker Carlsberg Group, could be a sustainable option for other coastal areas where rising sea levels and more frequent storms are making groundwater saltier.

The plant being built by Desolenator in the Sundarbans delta in West Bengal state will start operating next year.

It will sell clean water at a subsidised rate and hire more than a dozen women in Pathar Pratima, a company official said.

The social enterprise model, with all proceeds going towards the salaries and training of the women and maintenance of the water distribution centre, is essential for this poor community, said Louise Bleach at Maastricht-based Desolenator.

“Water purification technologies can be expensive, and often people who are most deprived of clean water and in need of these systems cannot afford them,” said Bleach, development and impact lead at Desolenator, which is also building a plant in Dubai.

“Solar-powered desalination technology is sustainable and suitable for communities experiencing brackish water or heavily contaminated water even in off-grid, remote and challenging environments,” she told the Thomson Reuters Foundation.

In arid and coastal areas, desalination is key to supplying drinking water. There are more than 16,000 desalination plants worldwide, with about two-thirds located in wealthy nations.

But the technique is generally expensive and energy-intensive, and a 2019 U.N.-backed study found the plants produced on average 1.5 litres of brine for every litre of fresh water, which can contain toxins harmful to marine ecosystems.

Now, however, the process is becoming more affordable due to newer technologies and cheaper renewable energy options.

The India project – the first for Desolenator – is part of Carlsberg’s plan to halve water usage at its breweries by 2030 and conserve shared water resources in high-risk areas.

The Danish company has identified all seven of its Indian breweries as high-risk sites and is using different technologies and water-conservation measures to tackle the problem.

The Sundarbans plant, which will produce about 20,000 litres of clean water per day for the town, can help set “the foundation for all other development goals – health, education, income generation and rural female empowerment”, Carlsberg said.

Local people now buy packaged water or water sold by private companies in trucks, often at “extortionate prices”, said Anurag Gupta, a programme coordinator at the WaterAid charity which is also a partner in the project.

The task of fetching drinking water often falls to women, who may have to travel long distances and also bear the brunt of illnesses from contaminated water, he noted.

“The women suffer the most, so we are training them to work in the distribution centre, and to increase awareness of the need for clean water in the community,” he said.

“The plant will not only solve the problem of contaminated water, but also provide jobs for women and increase the community’s resilience in an area that is facing major climate change impacts,” he added.