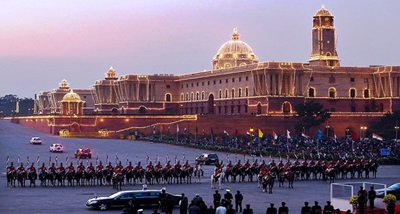 The Beating Retreat ceremony which marks the culmination of the four-day long Republic Day celebrations will be held at the historic Vijay Chowk in New Delhi today. The Defence Ministry said, this year, Indian tunes will be the flavour of the ceremony.

As many as 26 performances will enthrall the spectators with captivating and foot-tapping music of the bands from the Army, Navy, Air Force and Central Armed Police Forces, CAPF.

The entry band will be Massed Band with Swarnim Vijay theme. It will be a Special new composition to commemorate 50 years of victory of India in the 1971 war against Pakistan. This will be followed by Pipes and Drums Band, CAPF Bands, Air Force Band, Naval Band, Army Mil Band and Massed Bands.

The event will come to a close with the ever-popular tune of Sare Jahan se Acha.

The Ministry said, this year, 15 Military Bands and 15 Pipes and Drums Bands from Regimental Centres and Battalions are participating in Beating the Retreat ceremony. Besides, one each of Indian Navy and Indian Air Force band will also form part of the event.

Beating Retreat is a centuries old military tradition dating from the days when troops disengaged from battle at Sunset.

As soon as the buglers sounded the retreat, the troops ceased fighting, sheathed their arms and withdrew from the battlefield.