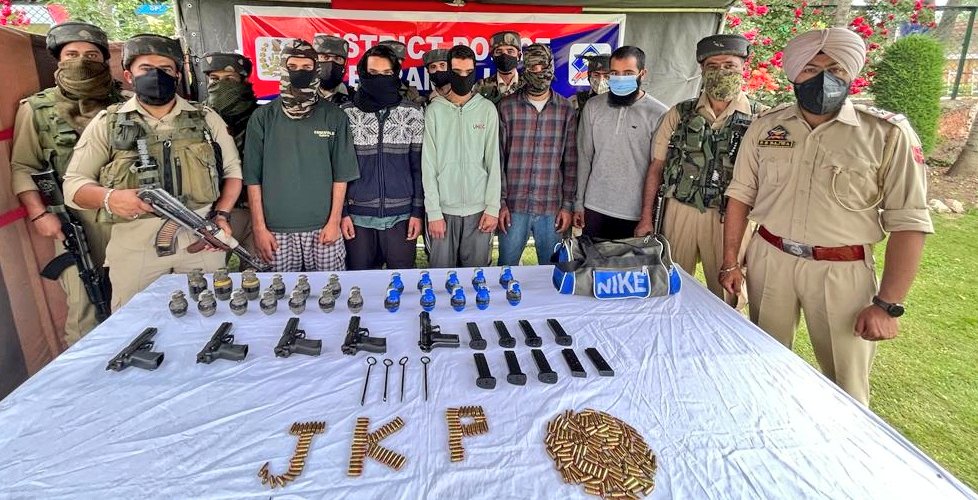 SRINAGAR: Four militants and their associate have been arrested by police in connection with a grenade blast in which an employee of a newly-opened wine shop was killed and three others were injured at Baramulla district on May 17, officials said on Thursday.

SSP Baramulla Rayees Mohammad Bhat IPS  said that the militant module of LeT (TRF), “which not only planned the attack on the wine shop recently but was involved in multiple other attacks”, was cracked with the arrest of four militants and an associate using “both human and technical resources”.

The officer said that five pistols, 23 grenades, one “suspicious package (likely IED)” besides seven magazines, 205 rounds of ammunition and 4 cleaning rods along with a bike used in the attack on the wine shop have been seized from their possession. The arrested militants have been identified as Shahid Ahmad, Safeer, Adil Ahmad, Faisal and Atif.

Besides the attack on the wine shop, the module was involved in grenade throwing in town and firing attacks etc. over a period of time, the officer said.

The officer said that it is a major success for police as the module was part of ” Falcon Squad of LeT (TRF).

At around 2010 hours on May 17, militants hurled a grenade inside the newly opened wine shop at Dewan Bagh Baramulla, injuring four employees. One of them, Ranjit Singh, son of Kishan Lal of Bhakri Rajouri, succumbed to injuries within an hour while three others— Govardhan Singh, Ravi Kumar, both residents of Billawar Kathua and Govind Singh of Kangra Rajouri – are under treatment.

Soon after the attack, police in a statement said that two militants riding on a bike stopped near the wine shop. Subsequently, the pillion rider “wearing a Burka” walked to the porthole of the wine shop and dropped a grenade inside it. “Thereafter (they) fled away on the bike from the spot”. (GNS)