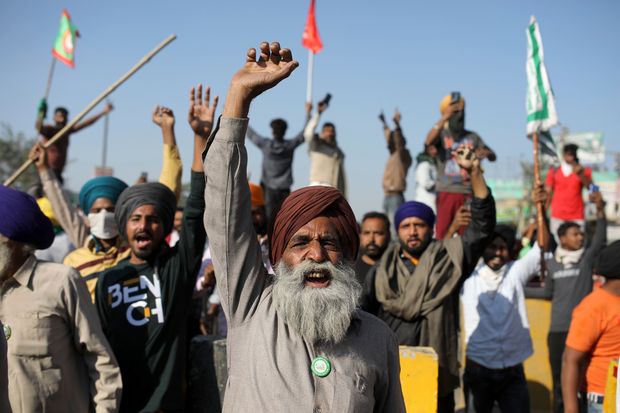 Indian farmers and bankers have put up a strong challenge to the move of privatisation, corporatisation of the economy and curtailment of labour rights.

The government is under WTO pressure to rush through the changes and bankers and farmers simultaneously organised Bharat bandh to oppose privastisation of banks and farmers’ march to Delhi against the recently enacted farm-produce marketing laws and draconian Electricity Bill 2020.

In a way the two simultaneous protests by the most influential sections of the society are causing a churning. The All India Bank Employees Association (AIBEA)-sponsored strike supported by AIBOA, BEFI, INBE, AIRBEA, AIRBWF, unions in rural (RRB) banks and cooperative banks opposes bank privatisation, allowing corporate to open banks, outsourcing, contract system and demands increase in rate of interest on bank deposits and reduction in service charges.

The bankers took cue from assertions of former RBI Governor Raghuram Rajan and ex-Deputy Governor Viral Acharya that the RBI proposal to allow business houses into banking is fraught with risk for financial system. They argue that the corporate are the largest borrowers, and the economic (and political) power would be concentrated in certain business houses and in-house or connected lending is invariably disastrous. They have even raised questions on the capacity of the regulators to remain independent and are apprehensive that it can succumb to the political pressure.

It may be recalled that banks were nationalised in 1969 for the reasons now enumerated by Rajan and Acharya and to free the public money in the then private banks for access by the people. The nationalised banks have made significant contribution through democratisation of the lending process. Many banks in 1960s were stated to have been on the verge of collapse for siphoning of funds by corporate owners. Recent laxity of the regulator, since 2009, has also led to severe NPA crisis and even some of the latest reports suggest it aggravating.

The AIBEA says, “The Lok Sabha in its recently held session has passed three new labour enactments by dismantling existing 27 enactments in the name of ‘Ease of Business’, which are purely in the interest of corporate. In the process, 75 per cent of workers are being pushed out of the orbits of labour laws depriving them of legal protection”.

Economic problems in the farm and banking sectors, curtailing of labour rights through three new labour laws dismantling 27 enactments are turning into a political crisis as tens of thousands of farmers from Punjab and Haryana crashed into Delhi, even as UP farmers’ block roads, as the Centre climbed down after tear-gassing and pressing water canon on them at borders with Haryana around the national Capital.

Surprisingly enough Bharatiya Kisan Sangh (BKS) led by Dinesh Kulkarni lent its support to the farmers’ causes and Delhi’s Kejriwal government refused to allow police to use stadia to detain protesters. It is said to have changed the stance of the Centre and restrained the police. May be it has brought the concept of federal polity at the centre of national Capital.

The farmers are also demanding scrapping of the Electricity Act 2020 that does away with subsidised farm tariff. The All India Kisan Sabha says that replacing the subsidy with transfer of benefit to their bank account was not a solution and would aggravate their problems. The overall aim of the law is to reduce subsidies in the power sector and push for privatisation, especially in distribution. People in UP are up in arms against the whimsical functioning of the power companies.

The moves of the farmers and the bankers have wider support. The government’s move to go into a collision course with the farmers has caused consternation among its affiliates, who also have been struggling to restore MSP within and outside APMC mandis. The talks are natural process and it should not have been forced by political rival AAP government, which is supposed to have taken credit of being pro-farmer.

It may impact future electoral courses or not but it has certainly brought to the fore that rushing through legislations against workers and farmers in favour of corporate and MNCs are not in the interest of the nation. It is not only the farmers, bankers and the Opposition which are protesting but even organisations like Swadeshi Jagaran Manch or BKS, part of the sangh parivar are opposing the move.

It is being perceived as changing the pattern of labour, banking and agriculture in the country. These bodies fear that relaxations being given would make it much easier for corporate to control the pricing of farmers’ products, may control the entire farm market, banking and weaken the public sector causing immense social and economic problems.

Across the board apprehensions are being expressed of the country succumbing to corporate and WTO pressures to further aggravate the problems already ruined by lockdown, severe production thawing, job losses and critical reduction of money flow as India is stated to be the slowest-growing economy among 24 countries in the July-September quarter to a decline of 12.7 per cent as estimated by NCAER and 7.5 per cent by National Statistical Office.

The perception of viewing MSP as subsidy is not correct. It only decides a floor. It should be agreed and ensured by law. Similarly, despite inflation galloping, keeping interest rates at a low of less than 5 per cent convolutes the basic principles, causes severe economic woes as value of deposits crashes and markets cringe. It is also a fact that the country cannot be left to the mercy of corporate. The situation needs dialogue and the Centre has agreed to one though the date remains in suspense. It is prudent to listen to the farmers, bankers and workers. The government should relent on its rigid stance to the drastic changes it made into farm, banking and labour laws. The country needs growth but it has to be for overall progress.