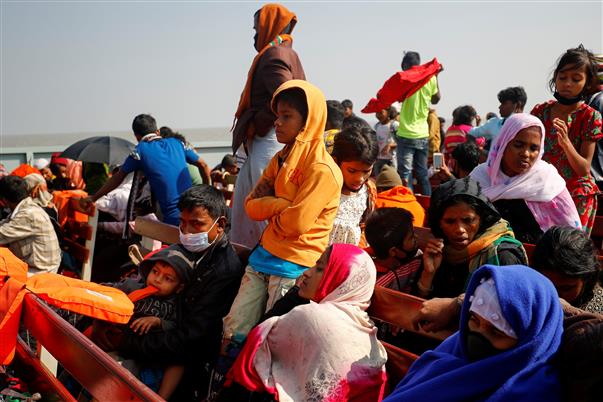 DHAKA: More than 1,400 Rohingya Muslim refugees were relocated to a remote island in the Bay of Bengal on Saturday, despite opposition from human rights groups concerned about the site’s vulnerability to storms and flooding.

Including a similar sized group who were moved on Friday, it brings to around 6,700 the number of Rohingya refugees that Bangladesh has moved to the island of Bhasan Char since December.

Bangladesh says the relocation is voluntary, but some of the first group of refugees who were relocated spoke of being coerced. The government also says overcrowding in refugee camps in the Cox’s Bazar district fuels crime.

“This time we have received a total 3,242 Rohingya in two days. Everyone is happy with the arrangements here,” Navy Commodore Abdullah Al Mamun Chowdhury, the officer in charge of the island, told Reuters by telephone.

Five ships moved 1,466 Rohingya and their belongings on Saturday after they were transferred from the camps to Chittagong, he said.

The Rohingya, a minority group who fled violence in neighbouring Buddhist-majority Myanmar, are not allowed to move off the island, which is several hours’ journey away from the southern port.

The Dhaka government wants to move 10 percent of the 1 million refugees living in ramshackle border camps.

Two Rohingya refugees who moved on Friday with their families told Reuters that frequent violence in the camps had forced the decision to relocate.

“We have been living in fear… In recent times almost everyday there is an exchange of fire and attacks centering on the domination of the armed Rohingya groups,” said a 28-year-old refugee, who asked not to be named for fear of reprisal.

“Murder, kidnapping, rape, drugs and other crimes have gone up these day,” said a 42-year-old refugee, who moved along with his wife and six children.

Two other Rohingya men told Reuters they moved to their new home voluntarily in “hope of a better life.”

The government has dismissed safety concerns over the island, citing the building of flood defences as well as housing for 100,000 people, hospitals and cyclone centres.

Bangladesh has drawn criticism for a reluctance to consult with the United Nations refugee agency and other aid bodies over the transfers.

The U.N. High Commissioner for Refugees says the agency has not been allowed to evaluate the safety and sustainability of life on the island.

Bangladesh Foreign Minister Abdul Momen told Reuters last month the U.N. should first assess and verify how conducive the environment in Myanmar’s Rakhine state was for repatriating the refugees, before carrying out an assessment of Bhasan Char.