Home World Affairs Bangladesh Minister has given explanation for cancelling his visit: MEA 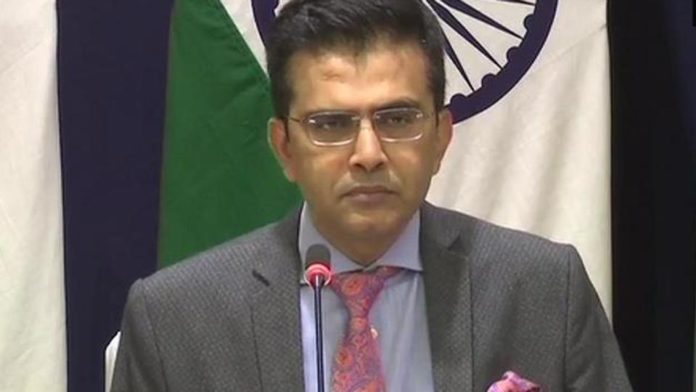 Commenting on the cancellation of Bangladesh Foreign Minister’s visit to India, the Ministry of External Affairs (MEA) on Thursday said that AK Abdul Momen has given his explanation regarding the same, and asserted that relations between the two countries are strong.
“He has given his explanation on cancelling his visit. Our relationship is strong. As leaders of both the countries have said, “this is the golden age of our relations”,” the MEA Spokesperson Raveesh Kumar said while addressing a press conference here. Earlier, in the day Bangladesh Foreign Minister AK Abdul Momen said that he has cancelled his visit to India due to “increasing demand at home”.
Momen was scheduled to arrive in Delhi today for his three-day visit to attend the sixth edition of the Indian Ocean Dialogue and the combined session of the Delhi Dialogue XI.
He was also supposed to hold talks on bilateral issues with external affairs minister S Jaishankar.
Momen, who was the chief guest at an event in Delhi, said that he has to participate in the Buddijibi Debosh and Bijoy Debosh.
Reacting to Bangladesh Foreign Minister’s comment on Citizenship (Amendment) Bill, the MEA spokesperson stressed that the religious persecution of minorities in Bangladesh has not happened during the present government.
“There seems to be some confusion. We have explained that religious persecution in Bangladesh on minorities hasn’t happened during present Government. The migrants who have sought refuge in India from Bangladesh have faced persecution and abuse on the religious grounds during the military rule and also during the previous governments in Bangladesh,” Kumar said.
The MEA spokesperson said they have acknowledged that present government in Dhaka has taken steps to substantially address the concerns of the minorities living in their country as per their constitutional provisions and laws of that country.
On Tuesday, Momen has rejected Home Minister Amit Shah’s statements on the condition of religious minorities in Bangladesh, calling the remarks as ‘unwarranted as well as untrue’.
While introducing the Citizenship (Amendment) Bill 2019 in the Lok Sabha, Shah had said that the Bill was brought to ensure that persecuted communities in Pakistan, Afghanistan and Bangladesh can live a dignified life in India.
The Bill aimed at providing Indian citizenship to the members of Hindu, Sikh, Buddhist, Jain, Parsi and Christian communities, who have come from the three countries to India till December 31, 2014, to put an end to them being treated as illegal immigrants in the country.