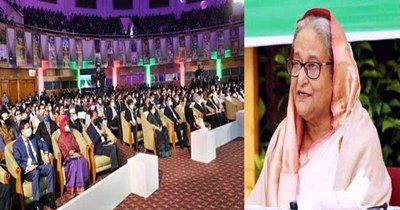 In a major boost to the film industry, Bangladesh has announced several measures to boost the film Industry in the country. The announcement was made by Prime Minister Sheikh Hasina in Dhaka yesterday during the ceremony to give away National Film Awards 2019.

Bangladesh will create a fund of Tk 1000 crore to provide concessional financing for building cineplexes and cinema halls for the people of the country. This was announced today in Dhaka by Prime Minister Sheikh Hasina of Bangladesh. During the National Film Awards handing over programme, Prime Minister Sheikh Hasina said that the government will not only open the closed cinema halls but also modernise them to attract more and more people to the cinema halls.

She assured the film community that the government will take all possible steps to develop and modernise the film industry in Bangladesh.

She called upon the film fraternity to make films on the theme of Liberation War of Bangladesh and its culture to let people know the real history of Bangladesh victory.

Information Minister Dr. Hasan Mahmud handed over the national awards to the winners on behalf of the Prime Minister.

National Film Awards 2019 were given away in 26 categories to people for their outstanding contribution to the film industry. The awards were announced on December 3 last year.

Eminent Actor Masud Parvez, known as Sohel Rana, and actress Kohinoor Akter Suchanda were conferred the lifetime achievement award for their contribution to the film industry.

‘No Dorai’ and ‘Fagun Haway’ jointly won the award in the best film category.

Taneem Rahman Angshu was given the award for best director for his film ‘No Dorai’.