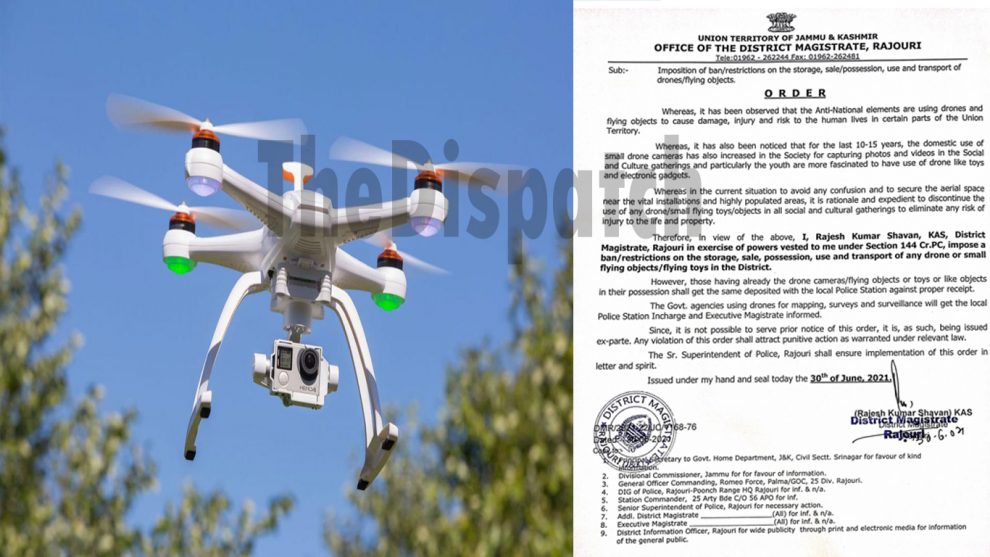 RAJOURI: Amid heightened security across Jammu and Kashmir after the recent bombing of IAF station by armed drones here, authorities in border district Rajouri on Wednesday ordered ban on the storage, sale or possession and use and transport of the flying machines.

An order issued by District Magistrate, Rajouri, Rajesh Kumar Shavan also directed those having drones or like objects in their possession to deposit the same with local police station.

However, the government agencies using drones for mapping, surveys and surveillance would get the local police station in-charge and executive magistrate informed, Shavan said in his order.

In what was the first instance of Pakistan-based terrorists deploying drones to strike vital installations, two bombs were dropped at the IAF station Jammu in the early hours of Sunday, causing minor injuries to two personnel.

The explosions took place around 1.40 am within six minutes of each other. The first blast ripped off the roof of a single-storey building at the technical area of the airport manned by the IAF in the Satwari area on the outskirts of Jammu. The second one was on the ground.

As per the order, Shavan imposed the ban/restrictions on the storage, sale, possession, use and transport of any drone or small flying objects/flying toys in the district in exercise of powers vested under section 144 of CrPC.

However, those having already the drone cameras/flying objects or toys or like objects in their possession shall get the same deposited with the local Police Station against proper receipt, the order said.

Defending his decision, the district magistrate said it has been observed that anti-national elements are using drones and flying objects to cause damage, injury and risk to the human lives in certain parts of the Union Territory.

Whereas, it has also been noticed that for the last 10-15 years, the domestic use of small drone cameras has also increased in the society for capturing photos and videos in the social and culture gatherings and particularly the youth are more fascinated to have use of drone like toys and electronic gadgets.

Whereas in the current situation to avoid any confusion and to secure the aerial space near the vital installations and highly populated areas, it is rationale and expedient to discontinue the use of any drone/small flying toys/objects in all social and cultural gatherings to eliminate any risk of injury to the life and property, the order said.

Shavan said since it was not possible to serve prior notice, it is, as such, being issued ex-parte.