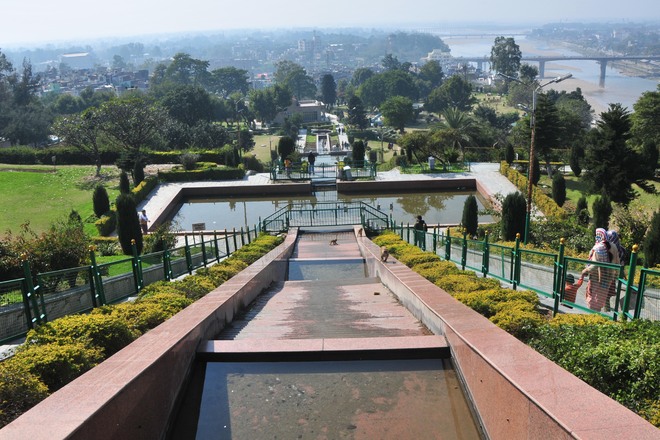 Jammu: The fate of much-hyped project titled Musical Fountain with Light and Sound Show at Bagh-e-Bahu is hanging in balance even after missing several deadlines fixed by the Government from time to time mainly because of dilly-dallying approach of all the concerned agencies and faulty planning at the time of preparation of Detailed Project Report.

The inordinate delay in the completion of the project is notwithstanding the fact that it was discussed in numerous high-level meetings and was visited by senior bureaucrats as well as Advisor to the Lieutenant Governor a number of times during the past more than one year.

After the reorganization of erstwhile State of Jammu and Kashmir it was stated in numerous official meetings that Musical Fountain with Light and Sound Show at Bagh-e-Bahu will be completed by March 2020 and accordingly all the concerned agencies—Tourism Department, Power Development Department and Jal Shakti Department (previously known as Public Health Engineering Department) were directed to work in tandem.

However, the project aimed at attracting more tourists to Bagh-e-Bahu failed to meet the timeline because of dilly-dallying approach of all the concerned agencies.

In the month of June last year, the Advisor to the Lieutenant Governor Baseer Khan visited Bagh-e-Bahu to inspect work on the project being constructed under the Prime Minister’s Development Package (PMDP) at an approved cost of Rs 1000.55 lakh.

He directed the then Director Tourism Jammu to put up a detailed proposal in respect of all such necessary additional facilities required for completion of the project which were not included in the original Detailed Project Report like power sub-station, public conveniences, view cutter and few kiosks for refreshment purposes.

While giving timeline for its completion, the Advisor directed that the project should be completed within a period of two months. However, the project also missed this deadline and the same was attributed to the situation created by the Novel Coronavirus, sources said.

In the month of January this year, Principal Secretary to the Lieutenant Governor Nitishwar Kumar, while reviewing the implementation of the directions issued by the Lieutenant Governor, also directed all the concerned agencies to work in coordination so that project is completed in all respect as early as possible.

In the same month, Advisor Baseer Khan again visited the project and issued directions for completion of project by March 2021 but again it met the same fate. In April this year, project also came up for discussion in a high-level meeting and issues relating to power and water supply for the Musical Fountain were thoroughly debated.

Regarding provision of power supply, Chief Engineer was directed to deploy all the necessary equipments and ensure power supply to the Musical Fountain by May 5. About water supply, Jal Shakti and Floriculture Departments were directed to evolve a mechanism as a short term measure for providing water supply to the Musical Fountain on sharing basis without affecting the supply of Floriculture till a dedicated water supply is made available.

However, for a long-term project, officers were directed to prepare a Detailed Project Report for a separate dedicated water supply to the Musical Fountain, sources informed.

“However, despite numerous meetings and visits by the Advisor as well as other bureaucrats, the fate of the project is still hanging in balance due to lack of coordination and dilly-dallying approach”, sources said while disclosing that though separate power transformer has been installed by the Power Development Department but the same has not been operationalized till date.

“Similarly, no provision has so far been made for providing permanent water supply to the Musical Fountain”, they further said, adding “even synchronization of Musical Fountain and Water Screen is still pending as engineers from Germany have yet not communicated any date for their visit to execute the task”.

They informed that 90 solar lights were also to be installed as part of this project but till date only poles have been erected and rest of the work is still pending. “In such a situation when the project will be formally completed and dedicated to public remains a million dollar question”, sources said.