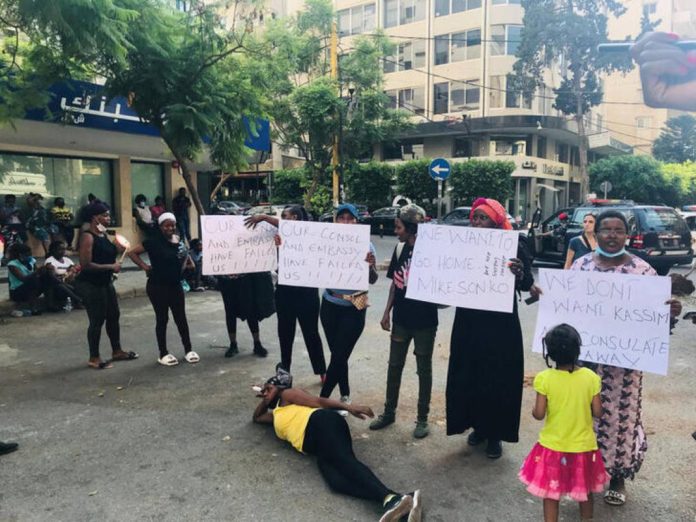 AMMAN: Thousands of migrants workers in Lebanon are desperate to return home as a coronavirus lockdown began this week, adding to woes caused by a financial crisis and this month’s port blast that wrecked swathes of the capital Beirut.

The explosion has damaged homes where many migrant workers living in precarious conditions now risk eviction as job losses mount, said the United Nations migration agency, IOM, in an appeal for $10 million to respond to the blast.

“I was very scared. I felt a very heavy wind and the building was shaking so hard as if it was going to fall,” said Sierra Leonean migrant Lucy Turay who lives in an apartment with 20 people after escaping abusive employers.

“Everything is going from bad to worse. We just want to go home,” she told the Thomson Reuters Foundation from Beirut, adding that she can no long find work as a domestic helper to pay for her siblings’ education back home.

Lebanon hosts about 250,000 foreign workers, some working illegally, who are employed under the country’s kafala sponsorship system which binds them to one employer and can lead to abuses, according to human rights groups.

Migrants, mainly from Ethiopia, Bangladesh and the Philippines, make up about 25,000 of the 300,000 people affected by the explosion, and need food, shelter, cash for rent, medical aid, mental health care and support to return home, IOM said.

It said at least 15 migrant workers died and 150 were injured in the blast, which killed some 178 people in total, injured more than 6,000 and pushed the government to resign.

Workers who were laid off amid the crisis or are undocumented cannot afford tickets home and have been calling on their embassies to repatriate them, said Zeina Ammar, advocacy manager at Lebanese migrant rights group Anti-Racism Movement.

“The only way to save the lives of migrant workers … is to evacuate them from Lebanon as soon as possible.”

Days after the explosion, a group of Kenyan women, some whose homes were damaged, protested outside their honorary consulate in Beirut asking to be repatriated for free.

Lebanon’s labour ministry said it was working with the consulate and humanitarian organisations toward finding practical solutions for their return.

The Kenyan embassy in Kuwait, which oversees Lebanon, said in a statement that it would help workers with emergency documents and negotiate to waive overstay penalty fees but that returnees would have to fly back at their own expense.

IOM said in its emergency appeal that it aims to help 2,500 stranded migrants return home, with poverty levels estimated to reach 50% of the population in Lebanon and a rise in reports of xenophobic incidents as a result of COVID-19.

“The top priority request of migrants, even prior to this explosion, is to get assistance with voluntary return programmes,” said Dima Haddad, an IOM programme officer in Lebanon.

“Some governments of countries of origin have been proactive. Others have limited resources,” she said, adding that coronavirus quarantine regulations on arrival have made repatriation efforts more complicated.

“Their families (back home) were selling their lands and parts of their businesses to pay for their rent and their bills in Lebanon,” said Deschamps, who is also providing financial support to the unemployed Sierra Leonean woman, Turay.

“They are really fearing that now no one is going to hear their cry for help because there are so many emergencies.”