Home Jammu & Kashmir ‘Back to Village’ a great success, can be replicated as model in... 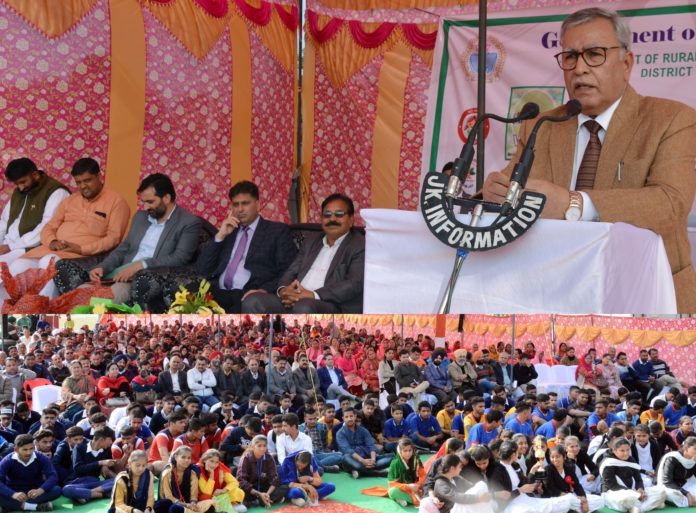 JAMMU, NOV 29: Terming ‘Back to Village’ programme as ‘Mission for Development’, Advisor to Lieutenant Governor, Farooq Khan today said that the flagship programme is already a grand success and could be replicated as a model for whole India.

The Advisor made these remarks during his visit to Kalyanpur Panchayat in Marh block of Jammu District as part of Back to Village-2 programme.

Addressing a gathering of locals, the Advisor reiterated that the Country’s prosperity is impossible without the progress in villages. The Advisor said that he has not come to inaugurate any project or new scheme but to encourage the people to participate in Back to Village-2 programme as it is already a grand success and could be replicated as model in rest of the country.

While calling the flagship ‘Back to Village’ programme as an innovative thought, Advisor Khan said, Prime Minister Narendra Modi has launched several schemes for the people of country which are mainly aimed at uplifting the rural economy and taking rural India to the path of progress and prosperity.

Addressing a large gathering of Sarpanchs, Panchs, officers and villagers, the Advisor said that the Panchayats have been empowered and more funds are given to these institutions for holistic development in villages.

Terming the Marh-Jhiri area as ‘vegetable basket of Jammu’, he asked concerned departments to make the people of the block aware about the organic farming which could increase local farmers’ income manifold.

He also said that the presence of Baba Jitto Shrine in the area can be a game changer for religious tourism by developing adequate tourism infrastructure and providing quality facilities to pilgrims.

The Advisor also announced an indoor stadium for the village to tap the talent of local youth in sports.

Later, the Advisor also laid the foundation stone for Community Sanitary Unit at Jhiri which is being constructed by Department of Rural Development. The facility would come up at an estimated cost of Rs 22.5 lakh under the scheme of model village.

On the occasion, Advisor Khan also listened to the grievances and demands of local villagers and Panchayat members who apprised him of several local issues. The Advisor assured them that all their genuine demands and issues would be looked into by the government and redressed at the earliest.

Speaking on the occasion, Secretary Higher Education, Talat Parvez Rohella, the visiting officer for the Panchayat, said that now a strong system has been put in place for Panchayat Raj Institutions (PRIs) where more powers have been devolved to them so that people can themselves make plans of development for their villages.

A cultural show featuring folk, Dogri and Pahari songs and Nukkad on B2V, Swachh Bharat Mission, Beti Bachao Beti Padhao and other Government Schemes was presented by the artists of Directorate of Information and Public Relations’ Cultural Wing Jammu.