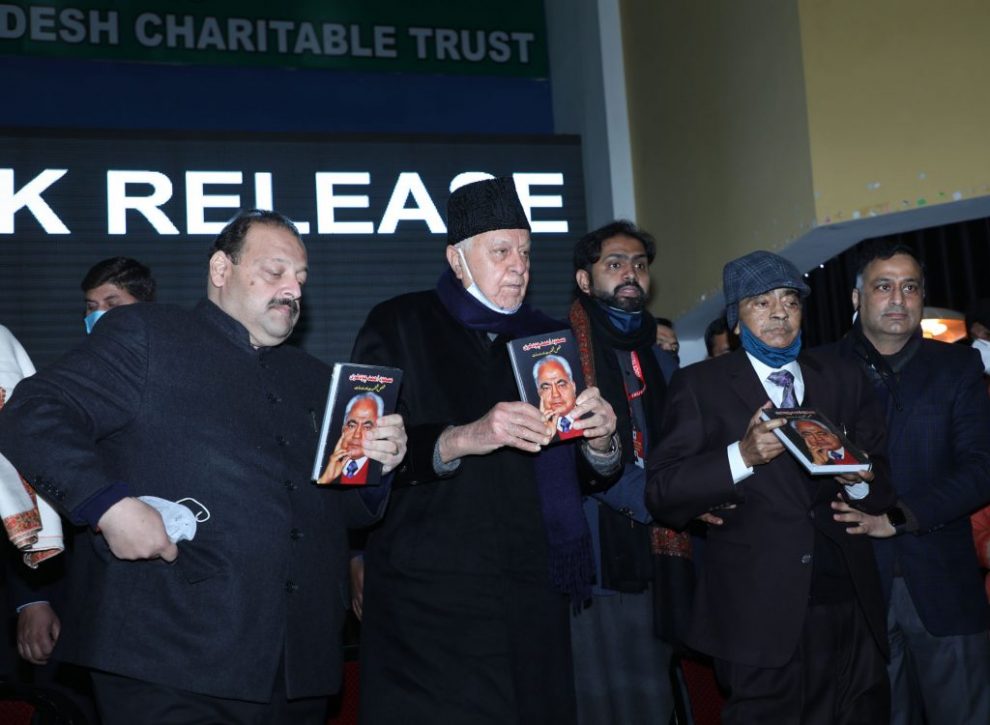 JAMMU: When Masud Chaudhary stepped out of college in late 1960s, there were only three Gujjars who had achieved the ‘rare feat’ of attaining a graduate degree till that time.

By around 1967 Masud was a Deputy Superintendent of Police, probably the highest-ranking Gujjar officer in the entire state of Jammu and Kashmir. At the launch of his biography in Jammu on Sunday, when Masud appeared to be conveying retirement from active community role, over a hundred Gujjar officers in the superior bureaucracy sobbed. For over three decades, Gujjar boys and girls have not only drawn inspiration from Masud but have also benefited from his community support initiatives.

Well known for his contributions in the awakening of Gujjar community and establishment of Baba Ghulam Shah Badshah University, Dr Masud Ahmed Chaudhary was today conferred with the “Fakhr-e-Qaum-wa-Millat” –a lifetime achievement award.

The award instituted by the Gurjardesh Charitable Trust was given away to Dr Masud Chaudhary by former Chief Minister Dr Farooq Abdullah –at a mega event attended by all sections of society in Jammu on Sunday. Several former Ministers, former legislators, notable citizens of society, political leaders and former colleagues of Mr Chaudhary from the Police department were among those who attended the event.

Leader of Opposition in Rajya Sabha and former Jammu and Kashmir Chief Minister Ghulam Nabi Azad and former Jammu and Kashmir Governor NN Vohra also spoke on the occasion. While Mr Azad joined the gather via video link, Mr Vohra had sent a pre-recorded audio for the occasion. Azad and Vohra recalled their personal association with Mr Chaudhary and described him as an extraordinary leader in which whichever role he took.

On this occasion a biographical account, in the shape of an Urdu book, on the life and contributions we Dr Masud Chaudhary was also released. The book explores the life of Mr Chaudhary and his contributions in Police department, in service of the Gujjar community and as an institution builder.

Widely known as Sir Syed of Gujjar Community for his untiring efforts in areas of social and educational awakening, Dr Chaudhary retired as Additional Director General of Police in 2004. Soon after that, he was appointed as founder Vice Chancellor of the Baba Ghulam Shah Badshah University in Rajouri where he spent two tenures. He shaped up the university on modern lines and ensured that the institution carries on a secular outlook.

Can’t believe a policeman could do this

Chief Guest on the occasion, former Chief Minister Dr Farooq Abdullah was at his eclectic best, picking up anecdotes from his various encounters with Masud Chaudhary. All along Farooq’s last tenure as Chief Minister –between 1996 and 2002 –Masud was Inspector General of Police and later Additional Director General. Speaking at the auditorium of the majestic Gurjardesh building –often critically referred to as Taj Mahal of Gujjars –Farooq said, “I can’t believe a policeman could do this much”.

Masud’s biggest contribution is in inspiring confidence in the Gujjar community. With his diverse leadership roles, Masud has not only encouraged Gujjars to work hard but also educated them in appreciating their history and taking pride in their glorious past.

Recalling his maternal origin in the Gujjar tribe, Dr Farooq Abdullah said that despite multiple efforts the community is still facing innumerable difficulties. He lauded Masud Chaudhary’s contributions in the social and educational awakening of the Gujjar community.

As there were only sixteen graduates among Muslims when Sir Syed Ahmed Khan picked educational movement as his life’s mission, Chaudhary said while drawing an analogy, “when I returned as a graduate, there were only three Gujjars in entire Jammu and Kashmir who had attained that rare achievement”. He said Gujjars have worked tremendously hard to create some space in the society while a lot still needs to be done.

Masud Chaurdhary gave an inspiring account of his journey in building the Gurjardesh Charitable Trust as in iconic institute of nationwide recognition and the establishment of Baba Ghulam Shah Badshah University in his capacity as founder Vice-Chancellor.

On the occasion a short film by Dr Javed Rahi on the life and contributions of Dr Masud Ahmed Chaudhary was also screened.

Upon the launch of biography, Masud Chaudhary took leave from his position of lifetime chief patron of the Gurjardesh Charitable Trust and nominated the current chairman Hameed Choudhary as chief patron. He read out a decree and sought permission from the House before nominating Hameed as chief patron. When he asked people if they permit him, there was an air of suspense in the hall. Many thought Masud would name his brother Javed Rana, senior National Conference leader and former legislator, or his son Arafat Masud, an Engineer. Chaudhary surprised everyone by naming Hameed. Hameed Choudhary is perhaps the most successful businessman from the Gujjar community. An active political activist for two decades, Hameed is widely respected for his philanthropy. Under Hameed’s tenure as chairman, the Gurjardesh Trust has seen many institutional reforms.

The mega function was organised by the Gurjardesh Charitable Trust under the leadership of its chairman Abdul Hameed Choudhary. Besides former chairmen, trustees, the event was attended by a number of political and social notables.