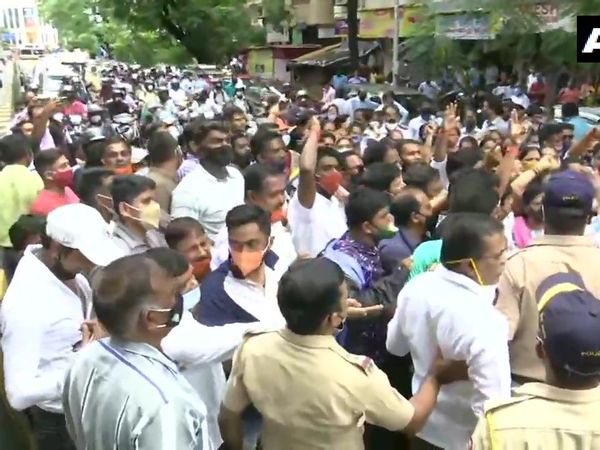 Following Shiv Sena leader Sanjay Raut’s demand for a ‘clarification’ from the Shri Ram Janmabhoomi Teerth Kshetra Trust on the charges of corruption in the land purchased by it in Ayodhya, the Bharatiya Janata Yuva Morcha (BJYM) workers protested outside Shiv Sena Bhavan in Dadar on Wednesday.

While Sena workers objected to the protest, a scuffle broke out between the BJYM and the ruling party workers.

Raut asked Uttar Pradesh Chief Minister Yogi Adityanath and RSS chief Mohan Bhagwat to comment on the issue as both had attended the ground-breaking ceremony of the grand Ram Temple in Ayodhya.

“People have made donations out of faith. Even Shiv Sena had contributed Rs one crore to the Trust. If the money collected out of faith is misused then what is the use of having faith? Raut asked.

Meanwhile, Rai refuted the baseless allegations and said that the Trust has so far bought the land at a much lower price than the market rate.

“We are applying full transparency in the purchase of land. We transfer money online for purchase of stamps and we transfer the payments to sellers online in their bank accounts,” he said.