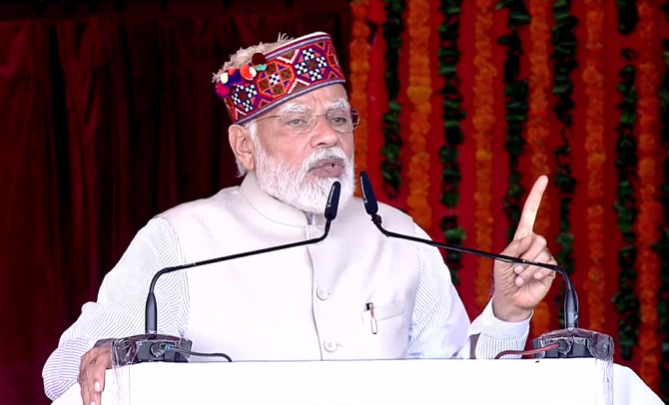 The Dispatch Staff
Add Comment
PM Modi said, “Before 2014, there was concern about the security of the country. Today we are proud of the surgical strike-air strike. Today our border is more secure than ever,”

JAMMU: Coming down heavily against Congress, Prime Minister Narendra Modi on Tuesday said that the people earlier used to talk about “atki-latki-bhatki (stuck, hanging, derailed)” schemes which the perception now stands changed for better.
“Earlier people used to talk about ‘atki-latki-bhatki’ schemes, nepotism and scams. But time has changed. Today people talk about the benefits of government schemes. Today India’s start-ups are being talked about globally. Even World Bank talks about India’s Ease of Doing Business,” PM Modi said.
PM Modi was addressing a public meeting in Shimla while taking part in the ‘Garib Kalyan Sammelan’ during which he also released the 11th instalment of Pradhan Mantri Kisan Samman Nidhi (PM-KISAN) scheme.
Attacking Congress, the Prime Minister said the government before 2014 considered corruption as an essential part of the system and had succumbed to it instead of fighting.
“Before 2014, the government had considered corruption as an essential part of the system. Instead of fighting corruption, the then government had succumbed to it. The country witnessed how the money of the schemes was looted before reaching the needy,” charged PM.
PM Modi said his government has removed 9 crore fake names from the list of beneficiaries of various schemes.
PM Modi emphasised that the country’s borders are more secure than they were before 2014.
“Before 2014, there was concern about the security of the country. Today we are proud of the surgical strike-air strike. Today our border is more secure than ever,” he said.
The Prime Minister further targeted the opposition over vote bank politics.
“Vote bank politics used to be there in our country for decades. The politics of creating their own vote bank has done a lot of damage to the country. We are working not to create a vote bank, but to build a new India,” he said.
Earlier, PM Modi interacted with beneficiaries of different government schemes at the event to mark the eighth anniversary of the BJP govt at the Centre. The event was held at Ridge Maidan in Shimla.
During the Sammelan, Prime Minister sought feedback about the various welfare programmes being run by the government from public representatives across the country.
Prime Minister Narendra Modi-led Bharatiya Janata Party (BJP) government completed its eight years at the Centre on May 30.

Join The Dispatch Whatsapp Group to stay updated
The Dispatch is present across a number of social media platforms. Subscribe to our YouTube channel for exciting videos; join us on Facebook, Intagram and Twitter for quick updates and discussions. We are also available on the Telegram. Follow us on Pinterest for thousands of pictures and graphics. We care to respond to text messages on WhatsApp at 8082480136 [No calls accepted]. To contribute an article or pitch a story idea, write to us at [email protected] |Click to know more about The Dispatch, our standards and policies
Tagsmodi The Dispatch