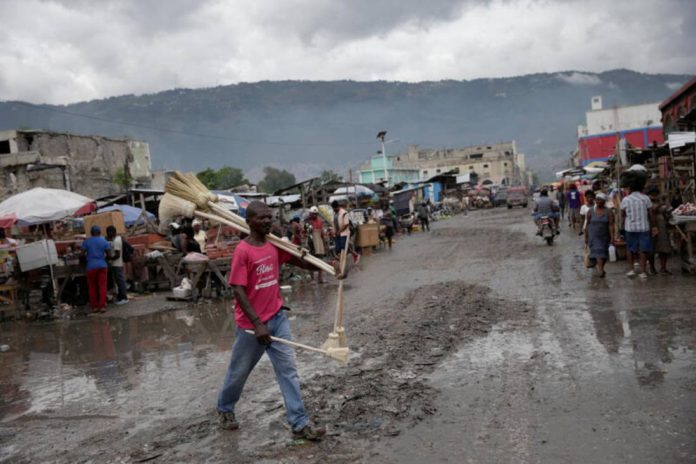 BOGOTA: Caribbean nations were scrambling to adapt storm shelters to prevent the spread of coronavirus and stock up on supplies, with thousands of people already evacuating their homes as the hurricane season gets underway, aid agencies warned on Monday.

A busier than normal Atlantic Ocean hurricane season has been predicted for 2020, and the coronavirus could “spread easily in crowded emergency shelters” where social distancing would be difficult, said UNICEF, the United Nations’ children’s agency.

“In the coming days and weeks, children and families will be at risk of being hit simultaneously by two disasters, COVID-19 and hurricanes,” said Bernt Aasen, UNICEF’s regional director for Latin America and the Caribbean.

“This is the perfect storm we fear for the Caribbean and Central America,” he said in a statement.

With more than 4.5 million COVID-19 cases and about 190,000 deaths, Latin America and the Caribbean have become a global hot spot for infections.

About 5,000 people in the Dominican Republic were evacuated from their homes over the weekend as Tropical Storm Isaias churned through the Caribbean and up the Atlantic coast.

In late May, thousands of people in Central America were forced from their homes due to Tropical Storm Amanda, which killed at least 33 people in the region.

“Social distancing will mean some evacuation shelters cannot be used or cannot take as many people as usual,” Patricia Scotland, Secretary-General of the Commonwealth of Nations, an association of 54 countries, told the Thomson Reuters Foundation.

“And curfews and restrictions on movements could mean more difficulties in the logistics of getting emergency assistance and supplies to affected communities,” she said.

Four of the 16 predicted storms this year could become major hurricanes, partly due to warming surface water temperatures linked to climate change, according to forecasters at Colorado State University. The annual hurricane season runs through November.

The Caribbean has already experienced more frequent and severe storms and hurricanes tied to global warming in recent years.

In the Bahamas, islanders are facing “three simultaneous emergencies” – looming storms, the pandemic and its economic fallout that has decimated tourism, said the International Federation of Red Cross and Red Crescent Societies (IFRC).

Parts of the Bahamas are still reeling one year on from Hurricane Dorian, which left about 70% of the country submerged.

Thousands of people still live in tents and makeshift shelters and rely on drinking water delivered by truck.

To face the coming season in the Bahamas, storm shelters need to be cleaned more regularly, with bed spaces re-arranged for social distancing and hand-washing stations built, said Ariel Kestens, a top IFRC official in the Caribbean.

“The outbreak has introduced a new layer of complexity in the preparation for the (hurricane) response,” Kestens said.

The shelters were being upgraded, he said.

With country borders closed because of the coronavirus lockdowns, it has been difficult to deploy international teams to help with hurricane preparations, Kestens said.

More local Red Cross volunteers have been trained online, including in the use of personal protective equipment, and they are sharing messages on WhatsApp community groups about river water levels and storm risks, he said.

To assist in hurricane preparations, a regional logistics hub has been set up in Barbados by the Caribbean Disaster Emergency Management Agency (CDEMA) to coordinate the shipping of relief supplies and personal protective equipment.

The Red Cross and U.N. agencies said they have positioned emergency supplies including collapsible water tanks, water purification tablets, tents and hygiene kits in places where they are expected to be needed.