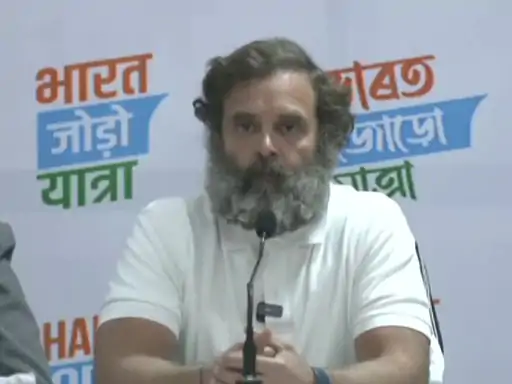 JAMMU: Calling senior leader Digvijay Singh’s remarks on surgical strikes as ‘ridiculous’, Rahul Gandhi on Tuesday said that the Indian armed forces do their job exceptionally well and they do not have to give any proof.

Addressing a drama-filled press conference at Jajjar Kotli here, Gandhi said that neither he nor congress agree with Digvijay’s statement who on Monday had said that the BJP government gave no proof of surgical strikes while claiming to have killed many terrorists.

Gandhi also demanded that the elections be held in Jammu and Kashmir at the earliest after restoring the statehood to the region, which he said is passing through a difficult phase right now.

The Congress leader also said that the Congress respects Choudhary Lal Singh’s sentiment of supporting the Bharat Jodo Yatra, and that Ghulam Nabi Azad was not invited because 90% of his leaders are already in Congress.

Gandhi launched an attack on the BJP while taking sharp questions from journalists, some of whom were pushed away by the security personnel at the end of the presser, while some media personnel expressed their anguish, alleging ‘selective approach’ by the Congress in taking questions from them, leading to a commotion outside the venue.

In the 33-minute-long press conference, Rahul took 15 questions in total from as many journalists from different local and national media houses.

When asked if he agrees with Digvijay Singh’s remarks on surgical strikes, Rahul said that it was Singh’s personal statement and neither him nor congress endorse it.

“I don’t agree with the statement of Digvijaya Singh. It is crystal clear that we disagree with it. It is the official position of the Congress.

“The Indian armed forces do their job exceptionally well. They (armed forces) need not provide any proof,” he said.

Gandhi said that Congress is a democratic institution that allows conversations unlike BJP and RSS.

“Congress is a democratic party and not a dictatorship. His (Digvijay’s) statement is ridiculous. It is his own view but let me tell you Congress’ view is far above his,” Gandhi said.

When asked if Digvijay’s statement will ruin the hard work done by him over past months, Rahul said that the Bharat Jodo Yatra has achieved something very fundamental and important and will not be affected by someone’s individual comments.

He said that while the yatra does not have a political motive, he has to speak for the people who have been meted out injustice.

Gandhi said that he has talked to people in Jammu and Kashmir and has gained a sense of frustration among them.

“The government needs to restore the statehood of Jammu and Kashmir and conduct elections at the earliest,” he said and added that Congress’s position on Article 370 is very clear.

Hitting out at Rajnath Singh’s assertions that Rahul Gandhi has hatred in his heart, the congress leader said that everyone in the Yatra has remained respectful and has not attacked any political person or organisation.

“How can a padyatra which is spreading love in the country and uniting the citizens, can spread hatred,” he asked.

“I don’t think Rajnath Ji is expressing his personal views. He operates within a party where the top leadership tells him what to say. I don’t think he has a choice. His statement is the result of orders given to him by the top brass of the BJP,” Gandhi said.

“BJP is dividing people. Congress has given this country independence and all the institutions it has right now. When Congress was fighting the Britishers, BJP and RSS were also standing with them. The two-nation policy was given by Savarakar and not us,” he said.

Gandhi said thousands of crores of rupees have been pumped in by the BJP and the RSS systematically to distort his image but the truth always comes out, answering a question on him being derisively referred to as ‘Pappu’ on social media.

The Congress will teach the BJP that truth works in this country and not money, power and arrogance.

“Thousands of crores have been spent to distort my image. This was done systematically by the BJP and its leaders. Thousands of crores can’t hide the truth and you have witnessed it. The truth always comes out,” the 52-year-old said when asked if the Congress was spending crores of rupees to counter his ‘Pappu’ image.

He alleged the RSS and the BJP leaders think that anything can be achieved with money and power.

“You can demean anyone, distort anyone’s image, buy any government, anything can be done with money. But that would not be true. Truth always pushes aside money and power and this stark reality is becoming evident to the BJP leaders slowly,” he said.

Gandhi said that the ancient scriptures say that truth always comes out.

“Truth is truth. Truth shines bright, It has this nasty habit of coming out. You can ban the truth, hide the truth, suppress the press, but eventually the truth will come out,” said Gandhi.

“We respect Choudhary Lal Singh’s sentiment of supporting the Bharat Jodo Yatra. Ghulam Nabi Azad was not invited because 90% of his leaders are already in Congress. But if you insist, I can invite him too. I apologise for any hurt caused to them,” said Gandhi, replying to a reporter’s query.

Right after the presser, Gandhi met a delegation of 40 members from Ladakh who apprised him of their issues.

Earlier on a cold Tuesday morning, the Bharat Jodo Yatra resumed from the garrison town of Nagrota around 8 am, where Gandhi was joined by actor-turned-politician Urmila Matondkar amid tight security, with Congress workers and supporters lined up on the road along the route to welcome them.

Dressed in a cream-coloured traditional Kashmir Pheran (loose gown) and beanie cap, Matondkar was interacting with Gandhi as they marched along. Noted author Perumal Murugan and J&K Pradesh Congress committee president Vikar Rasool Wani, his predecessor G A Mir and former minister Tariq Hamid Karra also joined them alongside hundreds of others carrying the tricolor in their hands.