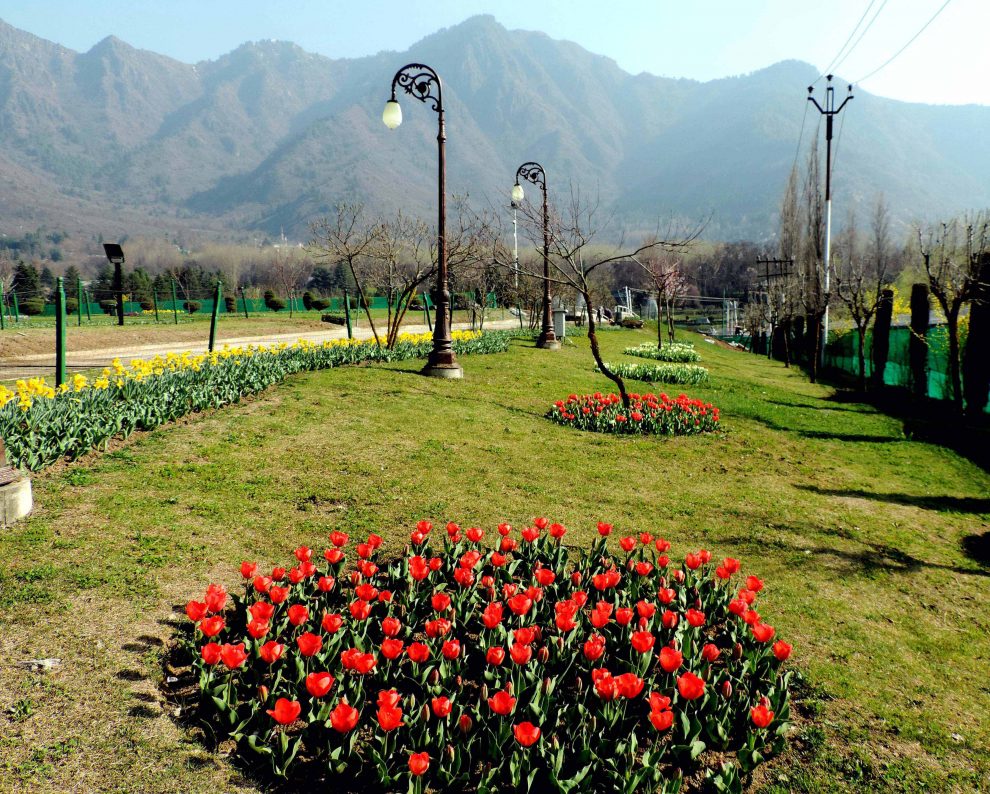 Srinagar: Asia’s largest Tulip garden on the foothills of Zabarwan in Srinagar would be open for the tourists from March 23 onwards, officials said.
“The Asia’s largest Indira Gandhi Memorial Tulip Garden, on the foothills of  Zabarwan in Srinagar is likely to be put through for the tourists from March 23 onwards’ ‘, Assistant Floriculture officer Tulip Garden Inam-ul-Rehman told UNI.
He said15 lakh tulips with 68 varieties of different graceful colours will bloom in the garden this year to welcome the tourists.
Besides the 68 tulip flower varieties, there would be Daffodil, Hyssen, Muscari, spring blooming shops and trees in the garden which would be other eye-catching attractions for the visitors this year.
Rehman said, an open air cafeteria which is being set up in the garden would be the main attraction for the visiting tourists.
A Sakura garden is being constructed at the east side of the Tulip garden on which the work is going on with full space, Rehman said and added that the structure and the buildings are completed and it would be another feather to attract visiting tourists.
He said, a tulip festival is also going to be held this year and the date of which would be decided by the authorities later on. There is most likely that some special guests would be invited during the festival for the entertainment of the tourists.
He said people will enjoy the view of beautiful tulip blooms after lock down and Coronavirus restrictions lifted following the drastic decline in Covid cases in Kashmir valley.
“After a long time the visitors will have recreation and have a view of rainbow of colours  in the garden which will make them happy and pleasant”, Rehman said.
He said the ticketing process has been outsourced.
Tulip garden Srinagar is Asia’s largest tulip garden with an overview of Dal Lake and  spread over an area of about 30 hectares of land.
A record  2 lakh tourists visited the garden last year. However, with the sudden flare up in the Covid cases the garden was closed as a precautionary measure.