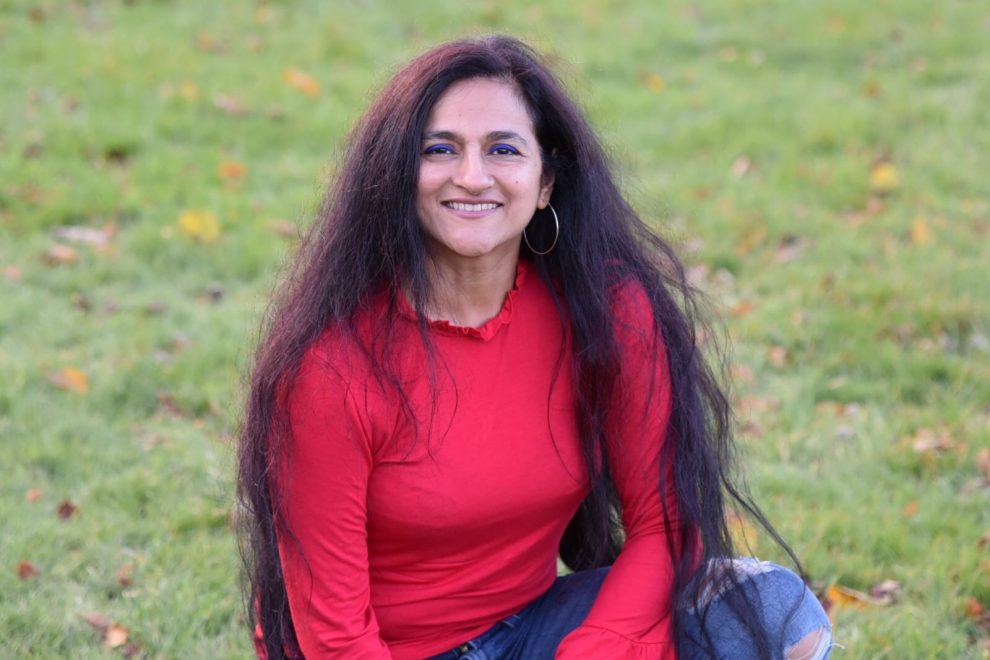 The forests grow denser, the mountains come closer and the road grows darker. Vishnu barely looks at his GPS, whereas I double-check to see we don’t take a wrong turn. And to my dismay we have overshot our left turn. The only one we had to take on the otherwise straight road so far. It is Vishnu who worriedly asks, ‘Madam, what GPS showing? May be missing turn?’

‘I’m so sorry. Yes, seems we had to turn left.’ In my earnest efforts not to miss a single turn, I had done just that. Missed the turn!

‘No problem, madam. Will reverse.’

Vishnu navigates the pitch-dark road with the white Etios’ tail lights, and it is then that I spot the signboard – old, decrepit, light-blue and screaming: ‘do NOT look at me’. It has an arrow pointing in with the name ASHRAM in fading white paint.

‘We are okay now, madam.’ I can hear the relief in Vishnu’s voice.

Yes, we are okay now, Vishnu.

As we near our destination, as indicated by Google Maps, I lose my mobile signal. What? Vishnu’s signal has gone as well.

We have now driven past the estimated two minutes and no Ashram is in sight. We keep driving but it’s all a dark blur.

‘Vishnu, I think we have shot past the Ashram. Should we turn back and go slowly?’

We reverse and drive back on the same road, very slowly. This time Vishnu spots a sign in Tamil. He stops the car and as our eyes adjust to the darkness, a few gates emerge. All locked. My phone is still dead and there is no way I can call the Ashram for directions.

I wait inside the car with bated breath. As I wonder what to do next looking worriedly at my lifeless phone, I see Vishnu running back. Behind him I see a torch-light and as Vishnu gets behind the wheel, miraculously a gate opens.

It is the Torch-Bearer opening the gates to the new phase of my life.

Vishnu has another brief conversation with Torch-Bearer as the latter looks at me before signalling me to get off. I look around nervously finding no sign to indicate this is the Ashram.

‘Is this the Ashram?’

‘Yes, yes, madam,’ Vishnu shakes his head from left to right in a rhythmic motion. The typical sideways shaking of the head, which in other cultures might indicate a negative but in ours it means the affirmative. Always.

Torch-Bearer is wearing his lungi folded so his knees are bare, as are his feet. I hesitatingly get off as Vishnu opens the boot of the Etios and Torch-Bearer heaves out my red suitcase. As Vishnu starts the ignition, I almost do not want him to leave. I have known him all of two hours and yet he is the closest to a familiar face in my life right now. The thought of being alone with Torch-Bearer in the back of beyond, with nothing to indicate this indeed is the Ashram, is not at all palatable. Yet I know I will have to let him go. I give him a generous tip and watch forlornly as the white Etios reverses on the gravel piercing through the silence of the darkness. I wave at him vigorously.

I turn back to see Torch-Bearer has opened a register and is gesturing at me with a pen. His face is kind and even though neither of us speaks the other’s language, I now feel strangely safe in his company.

‘How much taxi?’ are the first intelligible words from Torch-Bearer’s mouth.

I have no idea what he is saying. He then fishes out a laminated sheet and I notice it has taxi charges written on it. He taps at the name of a taxi company.

‘How much he?’ He points at the gate. Oh, so he wants to know how much I paid my taxi driver and whether it matches his taxi company’s rates.

Whether or not he understands, he sets down the sheet and now jabs at the register with his right forefinger. I pick up the pen, which is now lying on the register, and enter my name, address, phone number and time of entry. I also look at the other entries on that page and am comforted again. While I have still not seen any sign to indicate that this is the Ashram, I reckon I am in the right place.

I need to inform Husband that I have reached. Or at least that I am okay, considering I have gone from being constantly connected to being completely incommunicado.

I fish out my phone to see that it is just about coming up for air, as one faint stick suggests that perhaps a call is possible. It is. Husband picks up on first ring. I disconnect within seconds.

Torch-Bearer wheels my red suitcase, as I wheel my orange appendage – eight wheels making a cacophony in the unusual silence of the environs. While I try to find my bearings, I hear a soft voice say, ‘New admission?’

Before I can react or even see the owner of the voice, it adds, ‘Softly. Don’t disturb the others.’

And then I see the orange apparition. Not exactly orange, but orangish-red, or gerua – the colour that most Hindu monks, sadhus, swamis, essentially ‘holy’ people wear, denoting renunciation. There is some debate on the thin line between gerua and bhagva, the latter being the saffron colour denoting fire and wisdom, also donned by Hindu sadhus. But in common parlance the attire is referred to as gerua. Dressed from top to bottom in gerua robes, this person is the first affirmation that I am indeed in the right place. This is The Ashram.

Excerpted with permission from Ashramed, Dahlia Sen Oberoi, Hachette India. Read more about the book here and buy it here.

Join The Dispatch Whatsapp Group to stay updated
The Dispatch is present across a number of social media platforms. Subscribe to our YouTube channel for exciting videos; join us on Facebook, Intagram and Twitter for quick updates and discussions. We are also available on the Telegram. Follow us on Pinterest for thousands of pictures and graphics. We care to respond to text messages on WhatsApp at 8082480136 [No calls accepted]. To contribute an article or pitch a story idea, write to us at [email protected] |Click to know more about The Dispatch, our standards and policies
TagsAshramed Dahlia Sen Oberoi Hachette India Memoir

“Sing, Dance and Pray”: This book presents the inspirational story of Srila Prabhupada, the founder of ISKCON
“Not Just a Nightwatchman”: This book details Vinod Rai’s innings in the BCCI
Comment