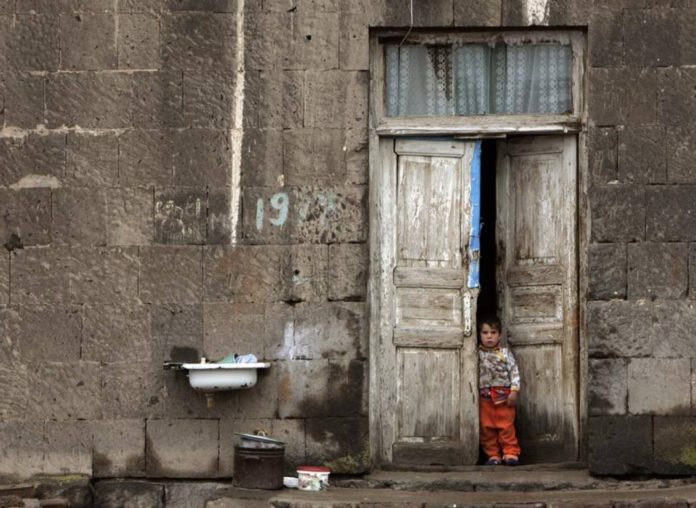 By Nvard Hovhannisyan and Umberto Bacchi

YEREVAN/MILAN: Gayane Azatyan has grown veg for 20 years – a prosperous enough venture despite the bad seed that was planted by the Soviet system and has blighted Armenia all her working life.

The 43-year-old makes a living growing broccoli, lettuce and other vegetables in the northern Armenian village of Jrashen.

Her farm covers 8.5 hectares – roughly a dozen football pitches and a sizable area by local standards.

Only the land is not contiguous, but made up of several small plots scattered across the village, some of which she owns and the rest she rents from near-neighbours.

“It is a problem,” she said by phone. “We spend a lot of time and resources to take our workers from one land plot to another. It would be very good to have one big land plot.”

Excessive land fragmentation, a legacy of switching at speed from communism to a private-property system, has long hindered agricultural development in Armenia – where about half of all arable land lies abandoned, according to the government.

So now the authorities plan to reform the setup, do away with the communist legacy, modernise the Armenian economy and shore up food security in the wake of the coronavirus pandemic.

“The land reform will be an important step for unlocking growth in the agricultural sector.”

After Armenia became independent in 1991, state-owned farmland was split into small parcels and distributed in equal amounts – through a lottery – to an array of locals.

While the process was fair and buoyed food production at a time where the centralised system was in freefall, it also laid the groundwork for today’s problems, said Morten Hartvigsen, a land tenure officer at the United Nations food agency (FAO).

Most Armenian food comes from the 320,000 or so family farms that dot the fertile land in the southern Caucasus, according to the FAO, which is helping the government craft the reforms.

About 60% of these are less than one hectare in size and 89% are smaller than 3 hectares, it said.

By contrast, the average farm in England is 86 hectares, making for greater efficiency and higher yields.

Smallholders in Armenia are often unable to afford the sort of modern machinery and systems that would help them prosper.

In 2016, almost 40% of food produced in Armenia was eaten by the people who grew it, according to official data, killing off hopes of a vibrant free market in the former Soviet state.

This fuels a vicious circle of emigration and land abandonment, compounded by low and loosely enforced land taxes, according to the FAO.

“It doesn’t cost (owners) anything to have this land,” said Hartvigsen. “So, you get a job in Moscow for some seasonal work, for example, you move there and just leave the land, abandoned.”

The government wants to send a reform package to parliament by the end of the year, aiming to bring fallow land to life by banding small plots together and marketing them as one unit.

“Currently (investors) have to deal with too many small land holders and most of them have some paperwork issue,” said Khojoyan, the deputy minister.

Armenia’s land agency would act as an intermediary, seeking out the owners of abandoned parcels and encouraging them to put the plots on a database of available land that the agency would then combine and lease to farmers, he said.

Owners who want to take part would receive a small rent as incentive, he said, while government plans to raise taxes on abandoned lots have been shelved.

The agency might also buy parcels and lease them out, and run an exchange system so owners can swap plots, Khojoyan added.

The target is to get 25% of the abandoned land working within five years, boosting a sector that makes up a quarter of the country’s economic output, said the deputy minister.

“Coronavirus has doubtlessly stressed the need for reform,” he said, noting how the pandemic had revealed the true extent of food insecurity and unemployment in his landlocked country.

Border closures due to COVID-19 grounded the tens of thousands of Armenians who usually travel abroad for seasonal jobs, and the reform could help them find work at home, he said.

“Land reforms can be a stimulus to engage in agriculture and land cultivation,” he said.

To succeed, though, Armenia badly needs better roads and irrigation networks, according to the Agricultural Alliance of Armenia, an umbrella group of farming organisations.

“The main reason for not cultivating the land is the absence of irrigation water,” the group said in a statement, noting that about 75% of abandoned agricultural land had no irrigation.

“Before implementing these changes, the government should think about solving the irrigation problem. If it is solved, no inch of plot will remain unused,” said Aram Kirakosyan, a 60-year-old who grows apricot and grapes in the Ararat region.

“I’m afraid the price for the rent will increase,” she said, explaining she only paid a symbolic price to fellow villagers.

Khojoyan said irrigation projects would run in parallel with the reform.

Market forces would determine rents, he said, though government may initially set lower rates as an incentive to Armenians to weed out the old Soviet legacy.

“The government doesn’t want to make money,” he said.