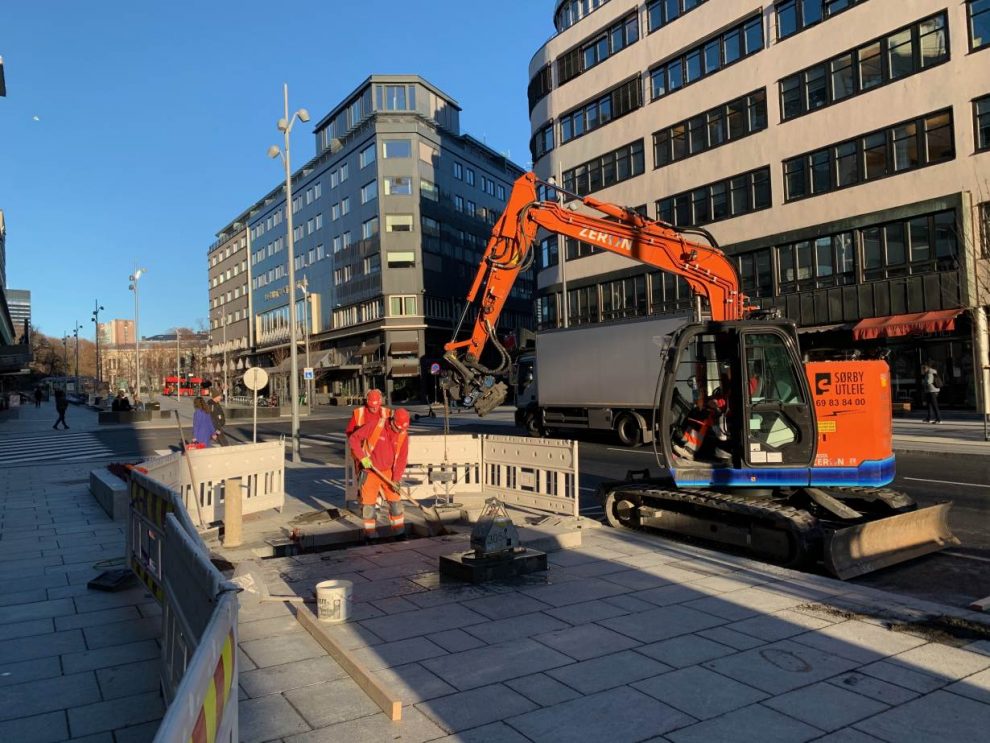 OSLO: A nearly “zero-emissions” building site in Oslo, using electric machinery, could be a pioneer for greener construction as the world’s urban areas swell by the equivalent of a Dublin or Dallas every week, city experts say.

Plug-in diggers, saws for cutting stones and other electric machinery have been used to create a pedestrian area in the centre of the Norwegian capital – completed in time for Christmas.

C40 Cities, a network of almost 100 of the world’s biggest cities working to slow climate change, called the diesel-ditching project by the left-wing municipality “groundbreaking and unprecedented worldwide”.

“Many cities are looking to Oslo to learn,” said Cassie Sutherland, programme director for energy and buildings at C40 Cities in London.

Sitting in chill winter sunshine at the Oslo site, on a new wooden bench by a flower bed planted with purple heather, project leader Marianne Mølmen of Oslo’s Agency for Urban Environment said the revamped street “has become really great.”

The area, lined with shops, cinemas and bars – many closed due to coronavirus – also has new bicycle parking racks and tree saplings. Fossil-fuel cars have been banned in much of the area, which includes special chargers for electric taxis.

Mølmen said the revamp project, which began in 2019, saved 35,000 litres of diesel fuel and 99% of greenhouse gas emissions compared to a conventional building site.

The project cost 64 million crowns ($7.2 million), compared to an estimated 59 million for a more traditional project, largely because electric machines are scarce and currently cost more.

The “zero emissions” standard used was more stringent than a previous “fossil-free” regulation in Oslo that allowed the use of biodiesel engines.

Norway generates almost all its electricity from hydropower.

Oslo leads the global “clean construction forum” for C40, whose members include big cities such as Beijing, New York, Tokyo, London and Paris.

The world’s construction industry accounts for more than 23% of global greenhouse gas emissions, C40 said, so any cuts will help nations meet goals they set in the 2015 Paris climate agreement to limit global warming.

And urban areas, especially in developing nations, are expanding at breakneck pace.

The U.N.’s panel of climate scientists said in its most recent assessment in 2014 that more than half of the world’s population lives in urban areas “and each week the global urban population increases by 1.3 million”.

That means adding urban areas the size of Islamabad, Harare, Dublin or Dallas every week or so.

Sutherland at C40 said priorities for green construction include upgrading existing buildings, rather than demolishing and re-building, improving designs and using better materials, such as recycled steel or low-emissions concrete.

Oslo’s “zero emissions” policy seeks to cover all work within the perimeter of building sites. But a lack of specialised electric machinery from suppliers means the municipality sometimes grants exemptions and permits machines that use fossil fuels.

In its recent project, the municipality allowed a diesel crane onto the site, for instance, after failing to find an electric one. It burned 16 litres of fuel. Also, asphalt laid at the site was by diesel-powered machines.

Among suppliers, Norwegian construction equipment producer Nasta refits excavators built by Hitachi with batteries, enabling them to operate for about four hours before running flat.

Those have created, for instance, the highest rate of electric car ownership in the world. In the first 11 months of 2020, 52% of all new cars sold in Norway were electric, according to the Norwegian Road Federation.

Oslo was named Europe’s Green Capital for 2019 by the European Commission.

A problem is defining where the city’s authority ends and less-stringent national building codes – which allow fossil fuels – take over.

Currently, Oslo only demands emissions-free construction on sites it controls, from roads to kindergardens.

“Four of five construction sites in Oslo are private or state owned,” Berg said, adding the city recently wrote to the centre-right government saying it wanted to demand that all sites in Oslo are zero-emissions or fossil-free.

It has not yet received a reply.

Among other green changes in the city in recent years, the percentage of electric vehicles passing toll points into Oslo has risen to 25% of all cars from 6% in 2015. Diesel cars pay a toll five times higher than electric cars.

The municipality has built 55 kms of cycling roads since 2015, after only about 15 km were added in the previous decade. More than 100 electric buses operate in Oslo and surrounding areas.

Those changes have stirred hostility from some car drivers. A new single-issue party, campaigning to abolish road tolls, won nearly 6% of the vote in 2019 municipal elections in Oslo.

Despite its greener policies, Oslo has fallen far short of a headline-grabbing goal in 2016 to halve the city’s greenhouse emissions by 2020.

Under revised, less ambitious goals, Oslo estimates emissions in 2020 will be 25% below 2009 levels, which were about 1.4 million tonnes.

Berg said a lack of government funding for carbon capture and storage – used to catch emissions and trap them permanently underground – at a municipal waste plant partly explains the shortfall.

Revisions to historic emissions data also have played a role, she said.

“We will get there but it will also be hard work,” she said.