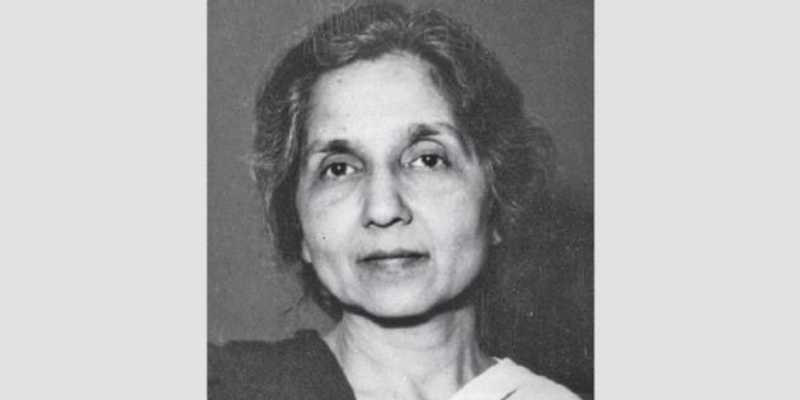 She was the inspirational figure in the 1946 naval mutiny, one of the few politicians from non-communist parties who dared to openly support the mutineers. Aruna Asaf Ali nee Ganguli was born to Ambalika Devi and Upendranath Ganguli in Kalka, Punjab (now in Haryana). Her father, a restaurant owner, hailed from Barisal district of Eastern Bengal but later settled in the United Province (now Uttar Pradesh). Her mother Ambalika, was a daughter of ‘Biplabi’ Trailokyanath Sanyal, a renowned Brahmo Samaj leader who composed many Brahmo hymns. Her paternal uncle, a university professor, was married to Rabindranath Tagore’s only daughter, Mira Devi. Aruna’s sister, Purnima Banerjee was a member of the Constituent Assembly. Little wonder then that she was imbued with both reformist zeal and an unbridled passion for India’s freedom from British rule.

Aruna was educated at Sacred Heart Convent in Lahore and then All Saints College in Nainital. After her graduation, she taught at Gokhale Memorial School in Calcutta. She met Asaf Ali, a Congress leader in Allahabad and got married in 1928, aged nineteen, defying opposition from the family on account of their different religious backgrounds and the fact that he was twenty-three years older. Her rebellious streak did not sit well with her paternal uncle who was Aruna’s guardian at the time (her father had passed away by then) and he disowned her for her decision to marry a Muslim.

Aruna’s husband Asaf Ali was a prominent politician and also an accomplished lawyer best known for defending Bhagat Singh. After her marriage, Aruna became a member of the Indian National Congress where Asaf Ali was a leading figure.

She participated in Gandhi’s Salt Satyagraha and was arrested on the charge that she was a vagrant. Despite the government’s decision to release all political detenues in 1931, she was not released because she was technically arrested for being a person without a permanent home. Her stature and popularity was such that other women prisoners refused to leave the jail until she was released. A public agitation and Gandhi’s personal intervention secured her release.

In 1932, Aruna was again held prisoner at Tihar jail in Delhi where she undertook a hunger strike to protest the welfare of other women inmates. Her efforts resulted in improvements of conditions in Tihar but she was subsequently moved to Ambala and placed in solitary confinement.

Aruna took a very active part in the Quit India movement in 1942. Gandhi’s call of ‘Do or Die’ was in line with her political thinking and action for attaining freedom. On 8 August 1942, when the Congress Party passed the Quit India resolution at the Bombay session, the British cracked down heavily and arrested all top leaders including Nehru and Mahatma Gandhi to stop the movement from gathering momentum.

This did not dampen the spirit of the firebrand young socialist. On the contrary, the arrests of top leaders motivated her to the extent that she presided over the remainder of the session on the following day, 9 August, and further defied the British by hoisting the Tricolour at Gowalia Tank Maidan (now Azad Maidan) in Bombay.

Instead of courting arrest, as was the fashion, she went underground. For the next three years she evaded the police, despite her property being seized and sold by the British Government. She refused to surrender, remained underground and continued to edit the Congress’s monthly magazine Inquilab, along with another firebrand socialist, Ram Manohar Lohia. Months after going underground she started to broadcast on the Voice of Congress through Congress Radio from Bombay, a clandestine radio station that had started operations within two weeks from the day when Aruna went underground. It operated between 20 August 1942 and December that year during the Quit India movement.

The Congress Radio countered British propaganda disseminated through state-owned All India Radio, sarcastically named Anti India Radio by Congress leaders. Through the medium, she issued a call to the youth of India, asking them to avoid futile discussions on violence and non-violence and join the revolution. She and her comrades such as Jayaprakash Narayan and Ram Manohar Lohia were described as ‘the political children of Gandhi, but recent students of Karl Marx.’

Several Congress leaders urged her to surrender but she was too independent-minded to listen to them. Even Mahatma Gandhi said: ‘I have been filled with admiration for your courage and heroism.You are reduced to a skeleton. Do come out and surrender yourself.’ But she was made of sterner stuff.

She eventually surfaced sometime in late 1945 when the reward on her head was withdrawn by the British. It was around this time that she was contacted by P.N. Nair, Kusum Nair, and Y.K. Menon. Young rebellious ratings like Dutt, R.D., and the group of other ratings who called themselves Azad Hindis, were put in touch with her by the Nairs to seek guidance and moral support for what they were planning. She pledged them active and open support. She became very close to the Nairs when Asaf Ali was in the hospital, as it was the Nairs who looked after him.

In her book, Resurgence of Indian Women, co-authored with GNS Raghavan, Aruna writes: ‘With the raising of the level of political consciousness there was discontent among the Indian personnel of the armed forces…’ Reaffirming her unstinting support for the uprising, she says: ‘Had the revolutionary spirit shown by our people during the Quit India movement and the RIN Mutiny been mobilised for a final round of the struggle for freedom, the Subcontinent’s partition might possibly have been averted.’ She attacked the ageing leadership of the Congress saying ‘ageing and tired Congress leaders whom the British released from the prison on 15 June 1945… were in no mood for a fresh struggle.’

Aruna Asaf Ali was more in agreement with Nehru, who had lauded the efforts of the naval ratings initially as opposed to the approach of Maulana Azad (then president of the Congress Party) and Sardar Patel who wanted the ratings to surrender. She also made her stand clear on the naval unrest saying the demand of the ratings were ‘entirely legitimate’. She offered her services to the ratings as a peacemaker.

At the height of mutiny, she differed publicly with Mahatma Gandhi on the issue. She was openly in favour of ‘the unconditional withdrawal of military patrols and immediate lifting of bans on civil liberties.’ The history of the freedom movement and the naval mutiny of 1946 would be incomplete without mentioning her courageous, independent role.

She represented the bravery and courage of numerous young men and women and naval ratings whose revolutionary and sacrificial efforts need to be told. In 1946, a rebellion of this nature and extent seemed unthinkable until it happened. The odds against taking on the might of the British were overwhelming.

Yet, the fact that they succeeded in getting so far and caused widespread consternation in Westminster, offers testimony to their courage and commitment in the cause of freedom. Many naval historians, in fact, describe the 1946 RIN Mutiny as the spark that lit the way for the historic events that would follow in 1947, when India, in Nehru’s words over All India Radio: ‘Would Awake to Life and Freedom.’

“Pitch Perfect”: What do voice and messaging mean for pitching and building an effective brand?
Fukuyama’s ‘Liberalism’ is an absolute page turner
Comment