From his childhood days, Nisar Ahmad Mir, a sports enthusiast, would watch the students of a local Taekwondo trainer Syed Ashiq Hussain from a distance. Born in a modest family of embroidery artists, he could not afford to join them, formally. But he would copy all the steps and practise at home.

“Those were the days when Bollywood actor Akshay Kumar was popular for his stunts so the Taekwondo steps attracted me,” said Mir. “This fascination led me to think that I can excel in this game.”

Luckily, one day, the local trainer, who was like a celebrity in Mir’s village, Soibugh (Budgam), found Mir as a regular candidate outside his class. He allowed him to enter the room and gave him a chance to play. Mir’s clear steps and better technique surprised the coach.

That was the game-changer. Syed helped him to be part of the 2002 Nationals, which Bangalore was hosting.

Then a ninth class student, Mir was quite excited that he can display his capacity to a larger audience. But there was a spanner. “I needed Rs 3500 but my mother told me they don’t have any money at home,” Mir said. “It was heartbreaking; I cried for the whole night.”

As he woke up in the morning with a sense of defeat and hopelessness, a mother’s heart knew the trouble of her son. She borrowed the amount and handed over to her son to follow his dream. And he says his mother had to borrow three times more to support his tours and keep him going.

Mir’s father, Muhammad Akbar, 68, is an artisan, who does embroidery on shawls. He was working overtime to support a 9-member family including four sons and three daughters.

That was why Mir’s elder brother is illiterate and also works with his father. His second brother was a non-medical student but due to poverty, he had to quit his studies in the B Sc second year. Initially, he started financing his studies by doing shawl embroidery but later he found he was not earning much so he changed his profession to carpet weaving. His third brother is also a second-year dropout, who is now helping his family by doing embroidery on shawls. Mir’s eldest sister, also an illiterate, is married. However, their two younger sisters are postgraduates and now pursuing BEd.

Mir couldn’t get a medal in Bangalore but that gave him confidence and exposure; he met a lot of talented players from north-east India. Since then, Mir said, Martial Art, is his only priority. His only dream was to be able to support his family and make his mother proud.

Now 15 years later, Mir is the first Kashmiri who is a National Institute of Sports (NIS) qualified coach for Wushu, a martial art variant; a pride for his mother and support to the Hfamily.

For every sportsperson, it is important to manage their timetable. In Mir’s case, managing education, work and sports are interlinked. He gives his time to every responsibility.

Mir has some naughty memories of his childhood. “Up to the fifth primary, I used to bunk classes and then for lunch I used to go home as if I came from school,” Mir remembers. “One day, one of my neighbour’s sent my school bag home before me and I still remember how I was thrashed by my family.”

The routine changed after he went to the High school. “I was actually a student of a local private school up to upper kindergarten but then my family couldn’t afford the fees so they had to admit me in a government school, which I didn’t like,” Mir said. “But the High school was better and my interest in studies and games improved.”

So far, Mir has participated in 18 national games: 12 nationals in Wushu, where he won five medals, including a gold, one bronze and four silver medals. In Taikandow he has played three nationals and won a bronze medal. In Muaythai, he has played three nationals and won three gold medals. He has also participated in one international competition in 2006, for Muaythai in Thailand where he could not perform well because he remained continuously unwell. “Muaythai is actually a local game of Thailand and is very difficult,” Mir said. “We have only a few people in Kashmir who know this game better.”

In 2007, Mir participated in a national in Vishakhapatnam. Seeing his good performance, he was selected as one among the other 20 sportspersons by Sahara Group in Mumbai, to be part of their company team. He was offered a job for Rs 15000 a month and accommodation. He accepted the offer but after 18 months he felt suffocated in absence of playing opportunities. “They did not let us play any game for all those months,” Mir alleged. “I wanted to play and perform so I thought it was better to resign. And I left that job and returned Kashmir.” 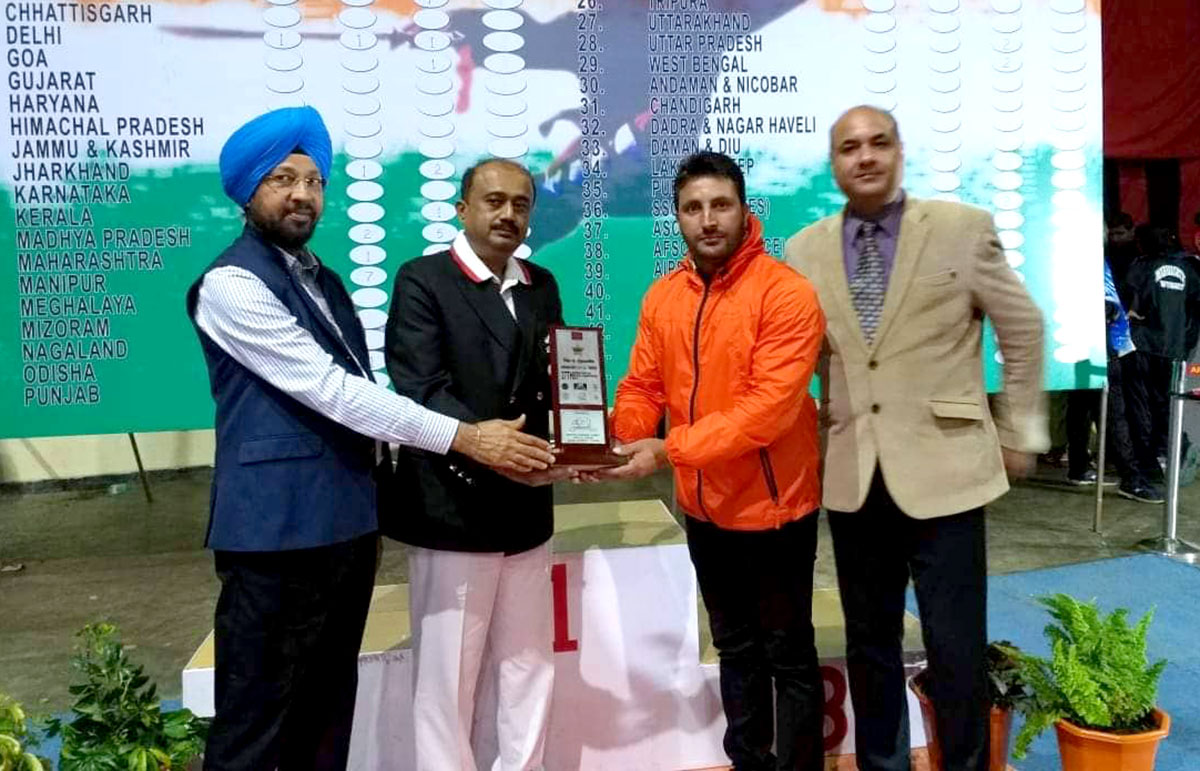 Mir’s profile finally got him a sub-inspectors job in Jammu and Kashmir Police (JKP) in October 2009. For the next three year, Mir had to be in the field until his probation was over. “Those days were difficult because I felt like I was not doing well with myself and with my sport,” Mir said. “So I started doing local events in Budgam. The boys I trained were mostly from Budgam district.”

Once his probation period was complete, martial arts again became his priority. Presently, he is working as a coach with J&K police and is a nationally qualified judge and referee for Wushu. He has participated in five national Wushu games and across India, he says there are only maximum thirty youths who have become judges for Wushu, so far.

“I have done one course is National Institute for Sports (NIS) in Patiala,” Mir said. “I am first NIS qualified Wushu coach in Kashmir, and there is no one for Taikandow. Muaythai is not popular in Kashmir.”

Locally, Mir says he trains youth from all adjoining areas. His own humble background drives him to help others. He has produced 20 medallists in Budgam. But he doesn’t charge them anything. He believes the youth who are in sports are mostly from humble backgrounds.

“I have suffered myself a lot for not being able to pay my fees,” Mir said. “I have started one school in Soibugh, where everything is free. But his change has not changed him totally. “When home, I still do the embroidery work.”