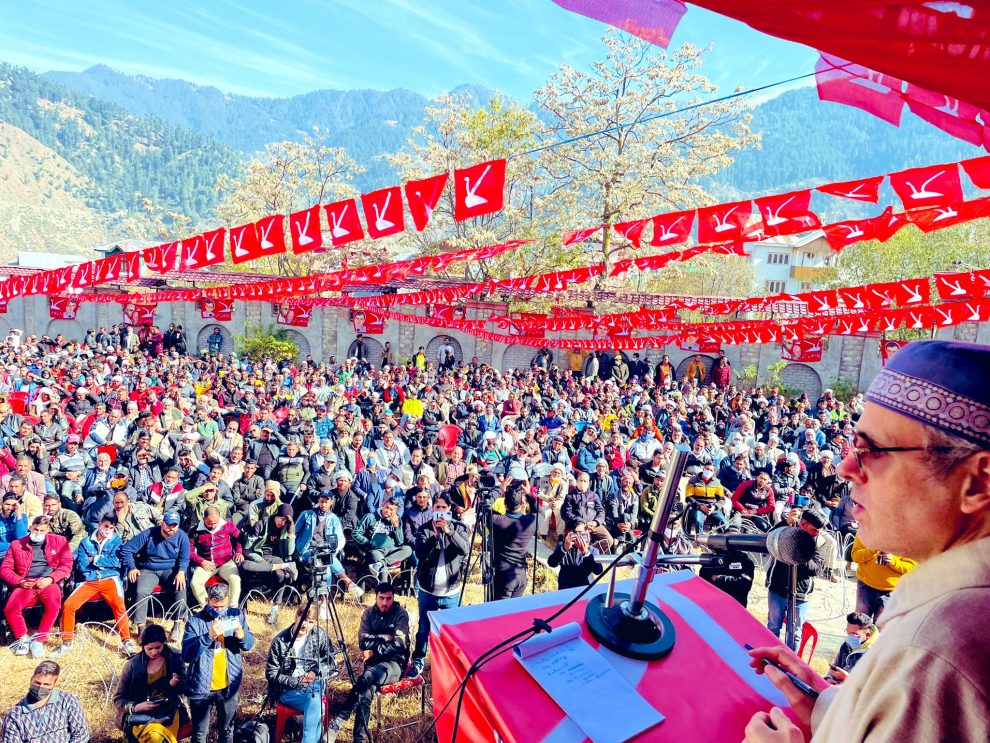 Bhaderwah: National Conference leader Omar Abdullah on Wednesday said revocation of Article 370 was in BJP’s manifesto but there is no logic behind withdrawal of statehood and division of the erstwhile state of Jammu and Kashmir.
He also accused the BJP of misleading the country by “false propaganda” to justify its action of August 5, 2019 and said the security situation has deteriorated to such an extent that “one cannot feel safe in any part of Kashmir owing to growing militancy which was evident from the selective killings including that of Kashmiri Pandits in the recent past”.
The former chief minister and National Conference vice president was speaking at a public meeting in Bhaderwah town of Doda district on the penultimate day of his week-long tour of Chenab valley in Jammu division.
He urged the locals to maintain communal harmony and brotherhood to “frustrate conspiracies of those dividing the people on the basis of religion” to win elections.
“The National Conference lost the 2014 assembly elections and the BJP took advantage and came to power through the back door and then pulled down the PDP-led government followed by what it was planning (to abrogate Article 370),” he said.
“I accept that the revocation of Article 370 was in the manifesto of the BJP but why was the erstwhile state downgraded and divided into two parts which was not in their manifesto. One fails to understand what the reason was for this. No one had any answer to it as well as what benefit it had to the people of J&K,” Abdullah said.
He said the demand for Union Territory status was only from “Buddhists of Leh” district, while the Kargil population wanted to be with Jammu & Kashmir.
“The reality is that all the claims (of the BJP) have fallen flat as there was no benefit of its decision on the ground. They talked about development, investment, jobs, peace and end to militancy and separatism but none of this happened over the past nearly two and a half years,” he alleged.
Abdullah claimed that the situation in Kashmir valley is grim “not because of Pakistan or some other country but growing militancy due to joining of local disgruntled youth into the ranks of militants”.
Referring to the removal of 40 security pickets from Srinagar with the improvement in security situation during his rule in 2009-2015, he said the community centres built by his government to facilitate marriage ceremonies in congested downtown Srinagar were converted into security camps.
“Militancy has not gone as claimed by the government after August 2019. They claimed that Article 370 was the obstacle in the return of Kashmiri migrant Pandits. Over two years have passed now, but none of the Pandits returned to their homes,” Abdullah said, adding selective killings including that of pharmacy owner M K Bindroo, who did not leave even during the peak of militancy, in October exposed their claims.
“One has to respond to their falsehood and false promises,” he said.
Referring to picturesque Bhaderwah, he said this is the only place in the entire Jammu region which has the potential for tourism growth and where holidaymakers can stay at least for four or five days but there was no investment either from the present government or the private parties which it promised will bring investment from outside.
“There has been no development of tourism related infrastructure here since 2015. I am myself witness to unscheduled power cuts during my night stay at the hotel. The room heaters were useless… God willing when the centre rule will end and we have our own popular government, the National Conference will ensure major tourism projects like a cable car for the valley,” he claimed and asked the Lt Governor administration to focus on the development of the region till the formation of a popular government.
He also promised justice with the people of Bhaderwah and said the “aim of his visit to Chenab valley along with other senior party leaders was to strengthen the party where it is weak”.
“We have not done justice with Bhaderwah and took several decisions in the past which led to the fall of the party. We left the assembly seat to Congress in 1987 and again to BSP in 1996 and both the times the candidates supported by National Conference won, while our party became weak,” he said.

Decrease in number of terrorist incidents in J&K after abrogation of Article 370: Govt
Patients kept waiting as doctor fails to turn up for duty at NTPHC Qalamabad
Comment