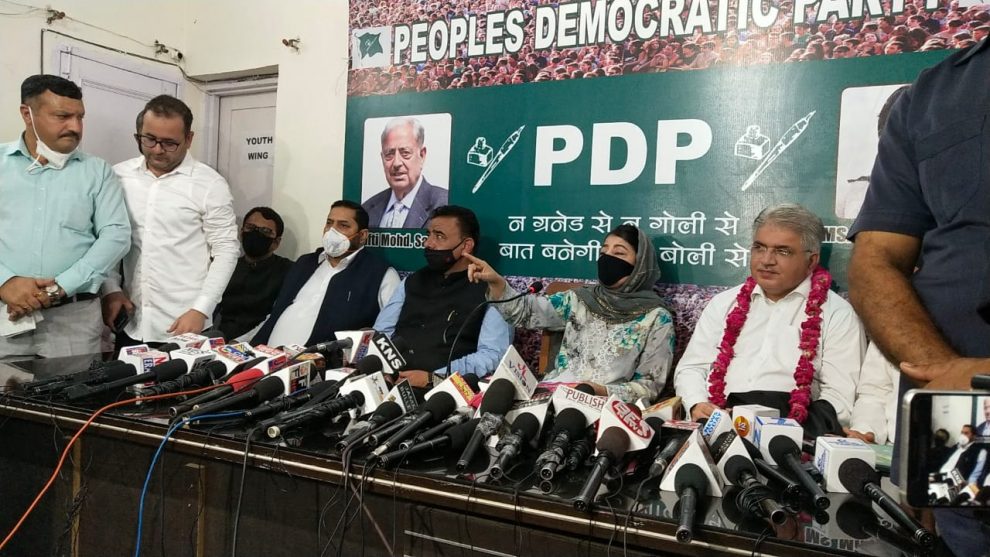 Srinagar: Peoples Democratic Party (PDP) chief Mehbooba Mufti on Monday launched a blistering attack at the Modi government accusing it of “looting” Jammu and Kashmir by abrogating Article 370 from the erstwhile state.

She also criticised the Centre for sacking 11 government employees in J&K for alleged “anti-national” and terror-related activities.

During a press conference, the former J&K CM said that Article 370 and Article 35(A) and Domicile laws were not given to Jammu and Kashmir by any foreign countries

Even before the nation gave us these, Maharaja had brought it to protect the identity of the people of J&K. When people decided to be part of India, he said that we have these laws that have to be upheld,” she said talking about the abrogated Articles of Indian Constitution.

Training guns at the Modi government, Mehbooba Mufti alleged, “But after the abrogation it seems that the only motive behind this was to loot J&K. People from outside are being given top positions at Chenab Valley Power Projects, our water and electricity go outside. Our transporters are in trouble. They have to pay toll tax and what not.”

“There is no policy. Unemployment and inflation are rising. Earlier, they used to say that J&K is backward, but we are ahead on several indices. But if their onslaught over economy continues, our situation will become worse than Gujarat as far as poverty is concerned,” she added.

When asked about her scathing remarks against the Central government over the termination of 11 govt employees in J&K for their alleged involvement in anti-national activities, she stressed that she is not supporting anyone.

She went on to explain, “You can’t hold a child responsible for actions of his father unless and until you have proof. These are not 11 people, they have sacked 20-25 this year.”

“I have said this again and again, you can capture a man but not an idea. You have to address the idea, as Vajpayee ji did. Witch-hunting, criminalisation of dissent is taking our nation back,” said the PDP chief.