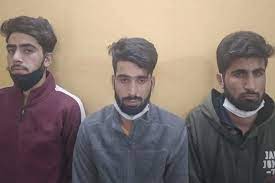 SRINAGAR: The Allahabad court Wednesday ordered the release of three Kashmiri students, studying engineering in an Agra college, who were arrested on sedition and cyber-terrorism charges.

The three students Arsheed Yusuf, Inayat Altaf Sheikh and Showkat Ahmed Ganai – students of an engineering college in Agra were arrested on October 27 last year by the Agra police, for cheering for Pakistan team’s victory against India in a T-20 World cup match.

J&K Students Union presidents Nasir Khuehami tweeted: “The Allahbad High Court today passed an order to release on bail three Kashmiri students, who were detained in Agra jail on charges of sedition for cheering on the victory of Pakistani team in T20.” Family members of the trio confirmed the development stating that the legal formalities are underway to secure the release of three students—(KNO)