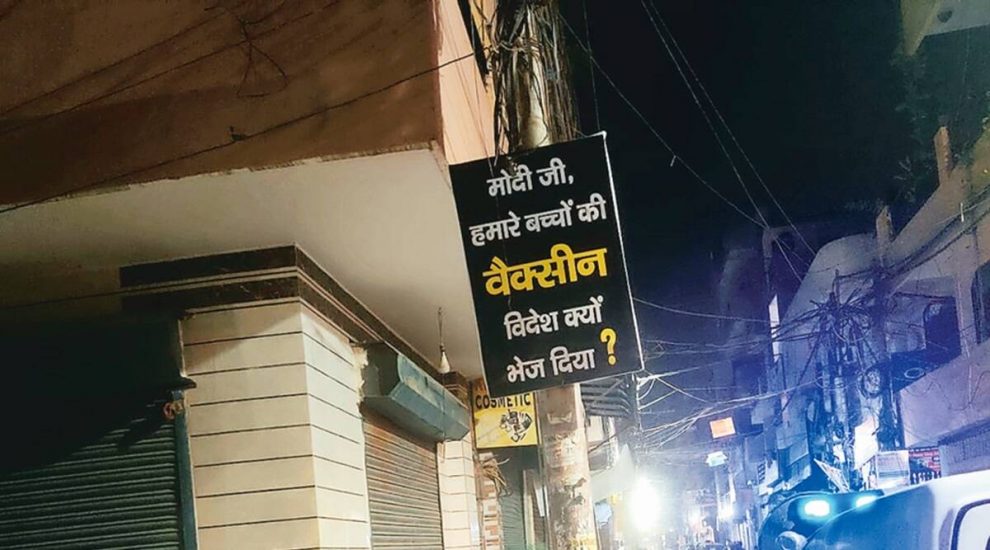 New Delhi: A 19-year-old school dropout, a 30-year-old e-rickshaw driver, a 61-year-old maker of wooden frames — they are among the 25 arrested by Delhi Police, in the middle of a raging pandemic, for allegedly pasting posters with comments critical of Prime Minister Narendra Modi regarding the Covid vaccination drive.

The string of arrests from across the capital started late on May 12 after the Special Branch informed Delhi Police Commissioner S N Shrivastava about the posters that read: “Modi ji hamare bachon ki vaccine videsh kyon bhej diya (Why did you send our children’s vaccines abroad?)”.

The Sunday Express visited the homes of two of those arrested and tracked police stations across the capital to find that many of those who were picked up were either daily wage workers who put up posters and banners for a living or jobless youths — and had no idea about the content or politics involved.

At Mandawali in East Delhi, one of the districts from where four were arrested, Rahul Tyagi (24), said he was given 20 banners by staff at AAP councillor Dhirender Kumar’s office on May 11, and promised Rs 600 for putting them up in Kalyanpuri.

When contacted, Kumar denied the allegations and said he was only involved in “working for the people”. AAP did not respond to the allegations, but tweeted on Saturday night — “Modi ji hamare bachon ki vaccine videsh kyon bhej diya” — the same line as in the posters.

“So far, 25 FIRs have been registered, and police are registering more after receiving complaints,” a senior officer said.

Tyagi was bailed out by his family Friday. So were the three others arrested with him from Kalyanpuri. “My parents are disappointed and won’t let me work anymore. I only do this for sustenance,” Tyagi said.

According to him, another person who was arrested, Rajeev Kumar (19), does the same work. The other two, Dilip Tiwari (35) and Shivam Dubey (24), “were given posters while Rajeev and I were given banners”, he said.

“I did not get the money promised. Police took the posters, and my bike is still at the police station. Police said we cannot put up posters and banners during the lockdown,” Tyagi said.

Neighbours recognise Tyagi as the “boy who does banner and poster work”. Said his aunt, Neelam Tyagi: “His father is an auto-rickshaw driver and has hardly been making any money since the lockdown. They have to pay rent and Rahul would give his earnings to his family.”

The arrests across Delhi have been made on complaints by police personnel. The FIRs have been lodged under IPC Sections 188 (disobedience to order duly promulgated by public servant), and 269 (negligent act likely to spread infection of disease dangerous to life), and those under the Delhi Prevention of Defacement of Property Act and Epidemic Act.

Probe officers said those who were picked were primarily involved in printing or putting up the posters for a paltry sum, while a probe is still on to track who commissioned them. All those arrested have been released on bail, said a senior officer.

In Mandawali’s Asha Ram Gali, where Rajeev lives, a shopkeeper said the family had left for their hometown in Bihar because his mother is unwell. “I don’t think he has any political links. He puts up banners and posters, from ads to event posters to political slogans,” he said.

Linking the four to the case, a senior officer said: “Devender is a contractor, who got Rs 15,000 for the job. He asked Chhabra, who runs his printing press, to get the posters put up. They later approached Gulati, a wooden frame maker, Rakesh, an auto driver and Murari, who put up such posters.”

Rakesh and Murari were arrested based on CCTV footage which showed them fixing a signboard on an electric pole.

A probe officer said: “Rahul works as a sales agent and he got the contract for printing the posters. Rajesh Sharma is the owner of the printing shop. They hired Anil’s e-rickshaw.”

From Dwarka’s Dabri, police arrested Mohd Sohail (26) and Mohd Akthar (24) allegedly while they were putting up the posters. An officer said they had been hired for Rs 300 by the owner of a printing press.

Similarly, from North Delhi’s Timarpur, police arrested Tarekswar Jaiswal (24). An officer said he had lost his job during the lockdown and was sitting at Ghanta Ghar in Sabzi Mandi when he was approached by a man who gave him Rs 500 to put up the posters.

Police said three FIRs were also registered at Bhajanpura, Khajuri Khas and Dayalpur police stations. “In all cases, a 19-year-old youth, Sanjay Kumar, was arrested. He was asked to paste posters by someone who gave him Rs 400. Police are trying to find out who this was,” said an officer.