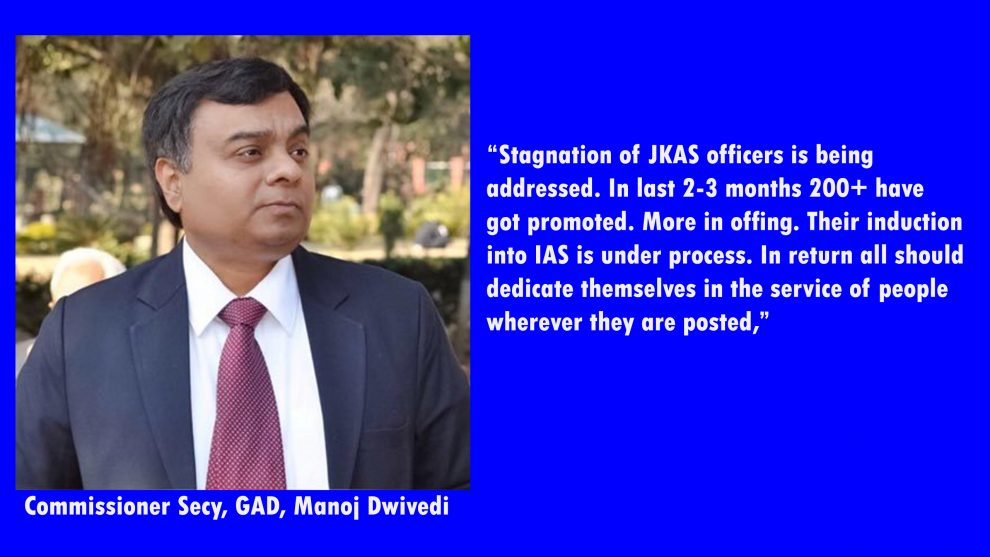 JAMMU: After a gap of nearly a decade, about 40 officers of Jammu and Kashmir Administrative Services (JKAS) including some who have retired from the services are all set to be inducted into the Indian Administrative Services (IAS) within the time frame of four to six months as the General Administration Department has initiated the exercise to this effect following fixation of seniority of the officers and clearance of all legal hurdles.

Official sources said that the General Administration Department, which functions as Nodal Agency for induction of JKAS officers into the IAS, today formally set the process in motion for inductions, an exercise which hasn’t been undertaken for the last about a decade in Jammu and Kashmir which involved tenure of three previous. Governments.

“However, the JKAS officers who will be inducted into the IAS, will get AGMUT (Arunachal Pradesh, Goa, Mizoram Union Territories) cadre as the Union Home Ministry had recently merged erstwhile Jammu and Kashmir cadre into AGMUT as J&K was made a Union Territory on August 5, 2019,’’ sources said.

They added that since inductions pertained to previous years, the process has to be carried out by the Jammu and Kashmir Government

As per the process, the General Administration Department will identify vacancies and years of allotment of IAS to the JKAS officers. This process has been initiated, they said.

“Tentative vacancies worked out by the Government revealed that about 35-40 JKAS officers are likely to be inducted into the IAS and will be allotted different years of induction,’’ sources said, adding that 1999 batch of JKAS is likely to be the major beneficiary of inductions. However, at the same time, decks will be cleared for inductions of 2000 and 2001 batch of JKAS officers.

The Jammu and Kashmir Government has set a target of 4-6 months for completion of entire induction process of JKAS officers into IAS.

“Once the process is completed by the General Administration Department the file will go to the Union Public Service Commission (UPSC) which will examine the names. The UPSC has to conduct the meeting of Departmental Promotion Committee (DPC) for issuing the final list of those inducted into IAS,’’ sources pointed out.

The DPC comprised the members of UPSC as well as from the Jammu and Kashmir Government.

According to sources, entire process for induction of JKAS officers into IAS would have been completed in two to three months but now the Government has set target of four to six months as because of COVID major focus of the Government has shifted towards the pandemic.

The 1999 JKAS batch of officers had to wait for 22 long years for their induction into the IAS, sources asserted and noted that in the process of wait some of the officers even completed their services and got retired. However, they added, the retirees will also be considered for induction into the IAS as they will get service benefits from the year they are inducted into the All India Services.

Once the process of inductions of previous years is completed, the Government proposed to make it a regular feature every year so that the JKAS officers are timely inducted into the IAS like other States and Union Territories and not after 15 years as is the case presently in Jammu and Kashmir.

“The shortage will definitely be overcome with the proposed induction of JKAS officers into IAS,’’ sources said.

Worthwhile to mention here that the Union Ministry of Home Affairs had merged Jammu and Kashmir cadre of All India Services into AGMUT on January 8 this year.

Centre provides over 26.69 crore vaccine doses to States, UTs so far
India emerges as 14th most charitable country in the World
Comment