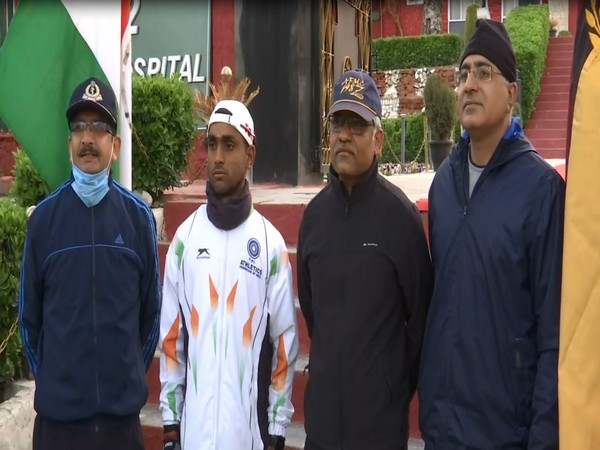 The Dispatch Staff
Add Comment
Velu started running long distances during his school days and then took part in many marathons before joining the Indian Army.

Jammu: An Indian Army sportsperson started out on a mission on Thursday to run 4000 kilometres, from Kashmir to Kanyakumari, in 50 days.

Velu P, an athlete of the Indian Army, started off on the long-distance run with the Indian Army proudly flagging off him from Srinagar. Velu aims to reach Kanyakumari via Delhi, Indore, Mumbai, and Bangalore. The flag-off ceremony saw huge participation of well-wishers with many Army officers and senior army personnel.

Velu started running long distances during his school days and then took part in many marathons before joining the Indian Army.

Velu, who has two mottos, “green India”, and “one nation one spirit”, aims to get into The Guinness Book of Records with his endeavour.

His seniors at the Army said that they are proud of him and that he is a source of inspiration to the youth. Velu thanked the Army who assured him of all the support in the long-distance run.

Velu said, “I am in the business of running for 15 years. For five years I have been participating for the India team in Ultramarathon, I achieved the Limca record for a 1600 km run the last year. This year I have set a target to get into the Guinness Book of Records by covering 4000 km from Kashmir to Kanyakumari in 50 days. In fact, I want to complete the run in 47 days to 48 days though I have set a target of 50.”

“One of my teammate in the Indian team, LL Meena passed away, to whom I want to dedicate this long-distance run,” he further said.

On being asked to give a message to youth, he said, “I have heard sportspersons say that they are worn out after running 5 to 10 km, I want to convey with this ‘run’ that the human body has no limits.”

Lt Col RD Shinde said, ” I am very happy that I got the opportunity to meet and talk with him. He is a source of inspiration for others. I wish him good luck on this mission and the missions ahead. I have full confidence that he will achieve his aim.”