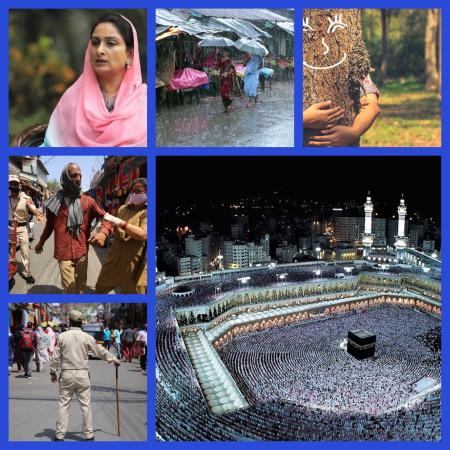 New Delhi: Amid a steep rise in coronavirus cases, Prime Minister Narendra Modi on Friday undertook a comprehensive review to ensure adequate medical grade oxygen supply in the country and called for ramping up its production.

With cases hitting a new peak in several parts of the country, the demand for medical oxygen has increased as it is a critical component in the treatment of COVID-19-affected patients. Read more on The Dispatch.

Jammu: In an effort to make the Indian Army cantonments and military convoys more population friendly, the Indian Army has now changed the red flags on its convoys to blue colour.

Speaking to news agency, Lieutenant Colonel Q Khan said, “the flags on the military convoys moving with troops from different locations in and out of the Kashmir valley have been changed to blue from red while the walls on the cantonments are proposed to have the pictures of young achievers from Kashmir.” Read More on The Dispatch.

In the backdrop of surge in COVID cases, the authorities conducting random testing of people roaming in city without masks. Watch more on The Dispatch.

Covid-19 vaccine: One dose isn’t enough. Govt explains why you need both

New Delhi:  The Centre on Friday released a video on why citizens need to take two doses of the vaccine against the coronavirus disease (Covid-19) to keep themselves and their loved ones safe. Dr Randeep Guleria, director of the All India Institute of Medical Sciences (AIIMS) in New Delhi, explained the importance of getting two doses of the Covid-19 vaccine. The clip issued on the Press Information Bureau’s (PIB)’s Twitter account. Read more on The Dispatch.

Monsoon to be normal this year, says IMD

New Delhi: The Southwest Monsoon, which brings more than 75 per cent of rainfall to the country, is expected to be normal this year, the India Meteorological Department said on Friday.

The Long Period Average (LPA) rainfall will be 98 per cent with an error margin of plus and minus 5 per cent, said M Rajeevan, secretary of the Ministry of Earth Sciences. Read more on The Dispatch.

A police team on routine patrolling at Thanamandi Shahdra road stopped a car for checking. Upon searching the vehicle, around 10 grams of heroin and cash worth Rs 13,000 was recovered from the possession of two people in the car, they said. Read more on The Dispatch.

Jammu: The Jammu and Kashmir government has constituted Tree Authority to take care of environment and preserving trees in both cities Jammu and Srinagar.

Official sources told The Dispatch that the administration had approved the formation of this authority in the city of Jammu and Srinagar in the month of December and in these two cities, the chairman of this authority has been appointed as the Mayor of both the corporations under which a five-member committee will work. Read more on The Dispatch.

In a tweet, the Congress general secretary said, I have tested +ve for #COVID19 today morning.

Anyone who has come in contact with me in the last 5 days, please self isolate & take necessary precautions, 53-year-old Surjewala, who is a former Haryana minister, said. Read more on The Dispatch.

New Delhi: The haj committee of India has issued a communication asking all haj aspirants to get two doses of the Covid vaccines before leaving for Saudi Arabia. Read more on The Dispatch.

New Delhi:  Former Central Bureau of Investigation (CBI) director Ranjit Sinha passed away in Delhi on Friday morning at the age of 68, people close to him said. Sinha was a retired officer of the 1974 batch of the Indian Police Service (IPS) and held several senior posts, including that of the CBI director and the director general (DG) of the Indo-Tibetan Border Police (ITBP). He died at 4:30am on Friday, according to news agency. Read more on The Dispatch.

Jammu: Lieutenant Governor Manoj Sinha Thursday called upon officials to ensure that locals get employment in all major projects underway in districts and asked them work on ground to assess area-specific development needs. Read more on The Dispatch.

New Delhi : A record single-day rise of 2,17,353 new coronavirus infections took India’s total tally of COVID-19 cases to 1,42,91,917, while active cases surpassed the 15-lakh mark, according to the Union Health Ministry data updated on Friday. Read more on The Dispatch.