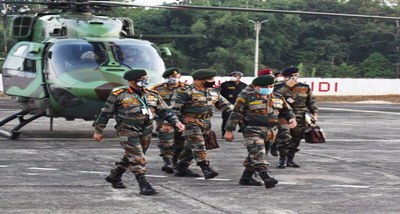 Chief of Army Staff General Manoj Mukund Naravane is on a three day visit to Nagaland to review the security situation in North East Region. On arrival at Dimapur on Monday, the Army Chief was briefed by Lieutenant General Anil Chauhan, General Officer Commanding in Chief, Eastern Command and Lieutenant General RP Kalita GOC Spear Corps on operational preparedness along the Northern borders as well as operations in hinterland of Assam, Nagaland, Manipur and Arunachal Pradesh. He was also briefed on the progress of the ongoing Naga Peace talks.

General Naravane visited various Army and Assam Rifles Headquarters in Nagaland and Manipur to make a firsthand assessment of the ground situation. He also interacted extensively with the troops deployed in the remote areas. General Naravane also called on Governor of Nagaland, Mr. R N Ravi and Chief Minister, Mr Neiphiu Rio to discuss the prevailing security situation in the State and security along the Indo-Myanmar border.