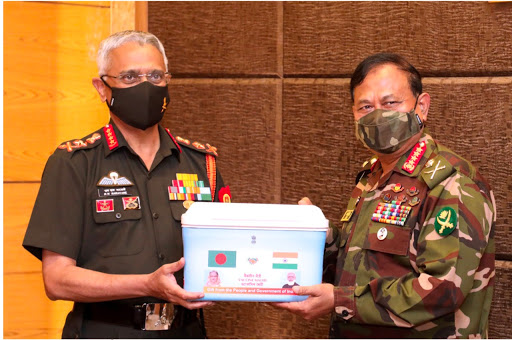 Army Chief General Manoj Mukund Naravane handed over one lac doses of the made in India Oxford AstraZeneca vaccine to his Bangladeshi counterpart General Aziz Ahmed in Dhaka on Thursday.

Army Chief General Naravane is on a five day official visit to Bangladesh from 8-12 April.

He arrived in Dhaka on Thursday morning.

After his arrival he paid homage to the martyrs of the liberation war of Bangladesh by laying a wreath at the Shikha Anirban in Dhaka cantonment in the afternoon.

He was also given a guard of honour by a Bangladeshi army contingent.

The Army Chief paid a courtesy visit to the Bangladesh Naval Chief and Assistant Chief of Air Staff (ops).

General Naravane will interact with Bangladesh’s Minister of Foreign Affairs on 11 April 2021 at Bangladesh Army’s Multipurpose Complex in Dhaka where he will attend a seminar on UN Peace Support Operations and deliver the  keynote address on the role of UN Peacekeepers.

During the visit, the Indian Army Chief will participate in the ‘Army Chiefs Conclave’ to be held on April 11 in Dhaka Cantonment.

It will be attended by the heads of the various UN peacekeeping missions and distinguished guests, including the Army Chiefs of the participating countries, said the Press release issued by the ISPR, Bangladesh.

The army of India, Bangladesh, Bhutan and Sri Lanka along with observers from the US, UK, Turkey and the Kingdom of Saudi Arabia among others are taking part in the exercise currently being held in Bangladesh between 4-12 April.

This visit will further deepen the bilateral relationships between the two Armies and act as a catalyst for closer coordination and cooperation between the two countries on a host of strategic issues, said the official press release issued by the Ministry of Defence.