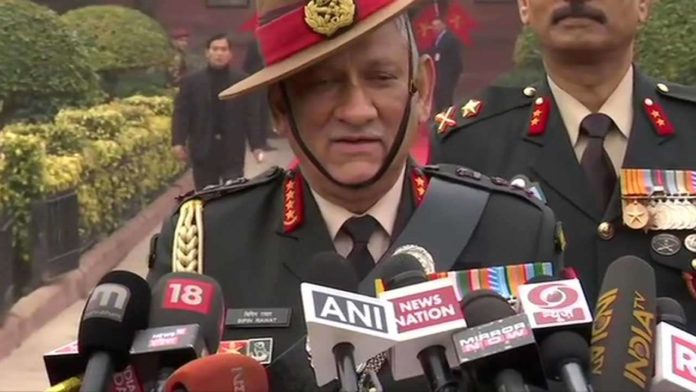 The Indian Army is better prepared to take on the challenges at Pakistan and China borders, said India’s first Chief of the Defence Staff (CDS) Bipin Rawat before demitting office of the Army chief on Tuesday.Answering a question by ANI whether the Army became better equipped to tackle challenges on the Pakistan and China borders under his three years tenure, he said: “Yes, they are better prepared.”General Rawat said that he is focused on restructuring and modernising the Army.”My focus was on army restructuring, weapon system modernisation, and non-contact warfare,” he told reporters here.

Speaking to reporters after paying tribute to martyrs at the National War Memorial, General Rawat expressed gratitude to soldiers and complimented “defence civilians and their families” for their support.

“As I demit the office of the chief of Army staff, I wish to convey my gratitude and compliment our soldiers, the ranks and files of Indian Army who have stood steadfast under challenging circumstances and performed duty in keeping traditions of armed forces,” he said.He said: “I thank defence civilians, their families, veterans and their families who have supported us, and me in particular, in helping me perform my duties in an honourable manner.”

He also extended new year wishes to the soldiers and their families.

General Rawat expressed confidence that General Ashok Narawane, who will be stepping in his shoes, will take the Indian Army to new heights.

“I also wish to convey my best wishes to General Ashok Narawane who will be assuming office as 28th chief of Army staff. We are confident that he will, through his competence and professionalism, take this army to even new heights,” he said and complimented Narawane’s wife who will be taking charge as the mantle of president of army wifes welfare association.

“The army will continue to achieve greater heights under their leadership,” he added.General Rawat took over as Army chief on December 31, 2016, after superseding two officers senior to him.General Rawat will take charge as the first Chief of the Defence Staff (CDS), a post created to make it the main point of contact for the government for dealing with defence forces’ issues.