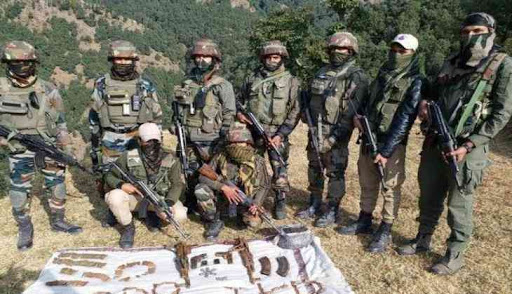 Jammu, Oct 30: Police and Army’s recovered arms and ammunition besides explosives that were kept by suspected militants in forest area near Gambhir Mughlan Rajouri district, officials said on Friday.

Senior Superintendent of Police Rajouri Chandan Kohli said that based on a specific information, joint parties of police and army’s 38 RR launched an operation in dense forest area near Gambhir Mughlan and found a hideout that was created beneath the forest surface using stones.

Two automatic AK47 rifles, as many AK magazines, 270 bullets, two Chinese pistol, as many magazines, 75 Pika rounds, 12 Blank rounds, 10 Detonators and 5-6 Kilograms of Explosive material were recovered from the hideout, he said.

The searches in the area are going on and police have also taken up investigation of the case after registration of FIR in Manjakote police station under relevant sections of law, he added. (GNS)